Donate
You are here: Home / Latest News / The creation of the National Leasehold Campaign

Out of the dark came fighting leaseholders!

Many of you may know me. I set up the National Leasehold Campaign in January 2017.

My inspiration to fight these injustices of the leasehold system has come from being introduced to the Leasehold Knowledge Partnership and also Louie Burns.  Seven months ago, the penny dropped for me that the magnitude of this scandal was MASSIVE.  There was no way I could let innocent families remain in the dark, I had to do something to inform as many people as I possibly could.  I embarked on the biggest learning curve of my life.  I feel I’ve done a crash course in the complex world of leasehold.  My head is fried.  I knew absolutely nothing about leasehold until January.

I have met some amazing people who share my passion for justice.  There is many people who are working hard to keep the National Leasehold Campaign Group running well.  To name a few are Jo Darbyshire, Cath Williams, Lisa Chapple, Clair Scott, Heather Truesdale, Karen Peel and Anthony Kent.

I had no idea by starting this campaign it was going to take off like it has.  It’s literally taken over my life. The campaigns success is not because of my campaign, this is because of the years and years of hard work LKP have put into this.

I feel very honoured that LKP have given our campaign a section within their amazing website.

Our National Leasehold Campaign Facebook Group now has a staggering 6775 members, and is growing daily.

The daily traffic on the facebook group is phenomenal, in the past 28 days alone we have had over 17K comments.  We have many upset, angry and frustrated leaseholder within the group, but we are determined to turn this energy into action and stand up for ourselves. ENOUGH IS ENOUGH.

I intend to update you all regarding what the campaign is up to.  We have held numerous demonstrations, have others organised and will continue to spread the word in both local and national media as much as we can.  We will continue to ensure Leasehold remains firmly in the spotlight.  We are not going away.

The government’s announcement to ban future leasehold houses is very much welcomed and a massive step in the right direction.  But we will continue to campaign until retrospective action happens.  As far as we are concerned if leasehold is wrong for the future it was certainly wrong in the past for both houses and flats.

One thing I need to clarify is this scandal is MUCH more than a “Ground Rent Scandal” that media refer to. It’s much more than “Doubling Ground Rents”.   This scandal is about the onward sale of our freeholds to unknown beneficiaries who use our homes as an endless income stream.  It really is a licence to print money.  Leaseholders had no idea this was what we were signing up to, it’s scandalous behaviour.  Literally the ground from beneath us has been sold often to the highest bidder (sometimes even at auctions).  Many of us, infact probably all of us feel we have been miss sold our homes.

What we as leaseholders want and will continue to fight for is our freeholds.  We don’t want RPI leases, we don’t want any lease.  We don’t want permission fees.  We want our homes, we want to secure our futures for our children. We want to be FREE and HOLD our FREEHOLDS without Holds over us.

GONE ARE THE DAYS LEASEHOLDERS ROLE OVER AND ACCEPT THESE ABUSES !!! 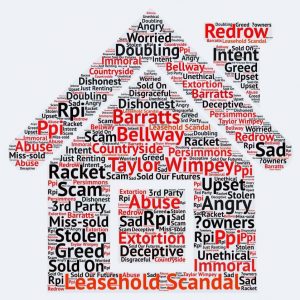 Here’s the National Leasehold Campaign pledge, after the government panders to the sector over its PR piffle emitted last month

Commons Library’s excellent resume of leasehold problems will give MPs plenty of ideas for reform
Next Post: Business Insider reports how easily developers get round ‘right of first refusal’