But … the bill to Kettering homeowners was more than £1 million, including Sean Powell’s fees of 10% to manage the project – from London – plus the VAT

… and, no, of course the victorious homeowners won’t get their £11,200 legal bill paid. That’s the property tribunal!

Freeholder and managing agent Sean Powell has been humiliated in the property tribunal after an inflated major works scheme was slashed by more that £600,000.

Sean Powell had bought the freehold to the 24-flat converted co-op bakery for only £68,000 in March 2012 and was adding 10 per cent to the works bill to project manage the scheme.

Sean Powell purchased the freehold of the Old Bakery from the administrators of the developer, who had gone bust. The scheme is now more grandly called King’s Walk and Regent Gate, although it has become markedly run-down.

The leaseholders, who are almost all buy-to-let investors, had let the freehold slip through their fingers and were slow to grasp the implications when Sean Powell began consultations over major works.

In October 2013 the property owners – who had already seen capital values at the site almost halved – were presented with a staggering bill that topped £1 million.

Ten per cent on top of the £756,384 was to be paid to Powell and Co Management Limited – directors: Sean Powell and Robert Powell, 78, – based in Paddington at 153 Praed Street, central London, which would project manage the works 75 miles away.

Another 20 per cent was accounted for by VAT.

It, too, is based at 153 Praed Street, and Patrick Goubel would present written and oral testimony at the hearing.

Faced with eye-watering demands, the leaseholders floundered for advice.

The bill came from Powell and Co Property (Brighton) Limited, whose directors are Sean Powell, Robert Powell, 78, Patrick Goubel, 48, and Tania Powell, no age given.

“To our shame, we unfortunately ‘stuck our heads in the sand’ and did not challenge/ reply to this notice [the section 20 major works consultation] for many months,” says Dr Leyden.

“We also need to admit that we felt the whole scenario was ‘just too bad to be true’.

“How is it that a country that is supposed to be one of the most fair minded and democratic in the world supports a legal system that allows unscrupulous freeholders to financially crucify hardworking people who have bought leasehold properties in good faith?”

Spending £11,200, the leaseholders employed a solicitor, a barrister and a chartered surveyor as a professional witness and the case was heard on January 27.

The leaseholders accepted that some works were needed – the tribunal found the Old Bakery “shabby and betraying the poor standard of conversion” – but disputed whether Sean Powell’s estimated costs were “fair and reasonable in all the circumstances”.

The tribunal noted: “The applicant [the leaseholders] said they believe the respondent has tried to create a large project out of the minor tidying up. The applicants understand some of the works in the schedule to be ridiculously expensive.”

And it added: “The applicants are also concerned that the respondent intends to project manage the work with an associate company and that the costs are likely to be much more than if a local company had been employed.”

But the leaseholders’ chartered surveyor Martin Pendred said that the freeholder’s schedule of works / specification “does not generally follow the surveyor’s report”.

Pendred pointed out that converting the supposed gym into living accommodation “appeared to have no benefit to the tenants” yet was charged at £39,000.

Replacing the external hardwood doors of the flats was also unnecessary and costed at £30,000.

Regalhelm had costed the windows at £70,000, but this, too, was the responsibility of individual tenants.

One external door that was blocked up had been costed at £5,840 to replace and decorate: “this was submitted to be a serious overcharging”.

£108,076 was accounted for by replacing the staircase enclosures , but the freeholder’s surveyors Budworth Hardcastle had “only stated that the design of the stairways was undertaken with no recognition of the need for detailing to accommodate thermal movement” … and so it went on.

Sean Powell told the tribunal that “the plans proposed works are supported by the police, local authority and the Member for Parliament”.

No evidence was presented to justify this remark.

Patrick Goubel told the tribunal that a meeting was held in Kettering on October 7 2013 to discuss the proposed works but that Sean Powell “had not brought a full breakdown of costing for the work and this was seen by some tenants as an attempt to hide the figures.

“In fact it was an oversight and three days later he sent all the tenants a full breakdown.”

One leaseholder, Mr Eisler, “gave a lengthy endorsement of the proposed works”, but he appeared to be in the freeholder’s employ.

The tribunal, chaired by Judge JR Morris, was having none of it.

“The tribunal found that the consultation procedure under section 20 of the Landlords and Tenants Act had not been carried out correctly. … The tribunal was of the opinion that the applicants had suffered prejudice.”

The tribunal ruled that the lower ground floor was not a common part under the lease and the leaseholders did not have to pay for it. The claimed £36,837 “allocated to the refurbishment of this area was determined not to be reasonable”.

Hundreds of thousands of pounds were claimed for works that the freeholder claimed were needed to comply with building regulations.

But they were not accepted by the tribunal. “No evidence is provided for this statement,” it said on multiple occasions.

“Taking into account the determination and the lack of time in which the applicants had in which to examine the detailed accounts …” the freeholder’s costs for the hearing could not be put against the service charge.

The tribunal also chopped off Sean Powell’s architects’ and surveyors’ fees, although these were reinstated on appeal as not being part of the major works scheme.

LKP has contacted Philip Hollobone, MP, who is also a Kettering councillor, to ask why Sean Powell claimed that he supported the over-priced works.

The full ruling can be read here:

The excuse of ‘building regs’

But there was no evidence that Kettering building control had issues with the work.

The tribunal stated: “It also noted that the contractor’s remedy is to replace the two existing structures at a cost of over £100,000 whereas the applicant’s expert submits that a remedial work could be affected at a cost of £5,000.

“No evidence such as a structural engineer’s report was adduced by the respondent to counter the expert’s opinion that remedial work on the existing structure would be satisfactory.

“In the absence of such evidence the tribunal determined that the remedial work referred to by the applicant’s expert at a cost of £5,000 is reasonable. Budworth Hardcastle’s survey states that the regulatory status of these items needs to be checked with building control.”

‘Building regs’ were cited as grounds for the following, but no evidence was presented:

… Meanwhile Mr Powell was fined £12,000 in April by Canterbury magistrates for renting out a flat in Thanet without a selective licence. 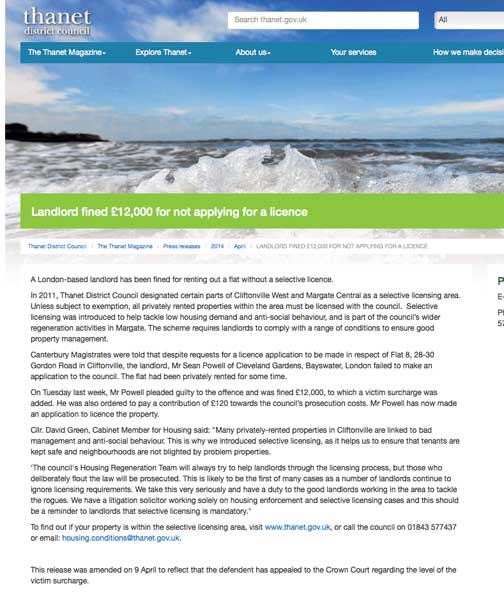