Donate
You are here: Home / Latest News / Galliard introduces ‘exit if we Brexit’ clause to homebuyers … but what about exit when you finally see the lease? 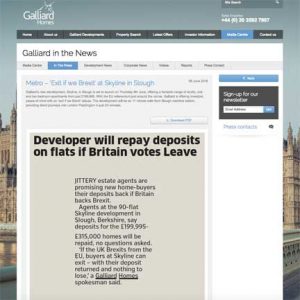 Galliard, one of Britain’s biggest housebuilders, has introduced “Brexit clauses” that give buyers the right to pull out of a deal to buy a new home if Britain votes to leave the European Union.

Galliard Homes, the largest privately owned property developer in London, said that its contracts now came with a clause allowing a housebuyer to pull out of a deal and get their money back.

“These are not normal times,” Donagh O’Sullivan, its managing director, is quoted in the Times. “We recognise that people are fearful. We want to acknowledge the very real risk to the economy …”

Full marks to Galliard for coming up with a referendum specific marketing wheeze, but how about this as a more important issue:

Flats are routinely bought off plan – from all developers – without buyers having the slightest idea of what is actually in the lease. That comes later.

And, extraordinarily, buyers fall for it.

There may be some indication of the length of the lease, but ground rents (and when they rise), whether there is a residents’ management company, or an embedded one in the lease, and numerous other nasties that may be introduced to the lease at a later stage are completely unknown.

It is astonishing that people undertake to buy property without knowing what they are actually getting.

Is there any justification for this? …  At all?

Galliard Homes ‘needs to take responsibility for what it has built’