Builders accused of mis-selling new homes are braced for legal claims worth millions of pounds after locking buyers into leases with spiralling ground rent charges. Sajid Javid, the communities secretary, this week announced plans to ban homebuilders from selling new houses on a leasehold basis.

The Times today considers how the ground rent scandal will be resolved, referencing possible class actions against developers or conveyancing solicitors. Or both.

“Solicitors who failed to flag up the conditions of these contracts to clients buying the homes are also braced for a wave of professional negligence claims.

“The Solicitors Regulation Authority has called for those affected to register a complaint. Companies found guilty of wrongdoing could be struck off.” 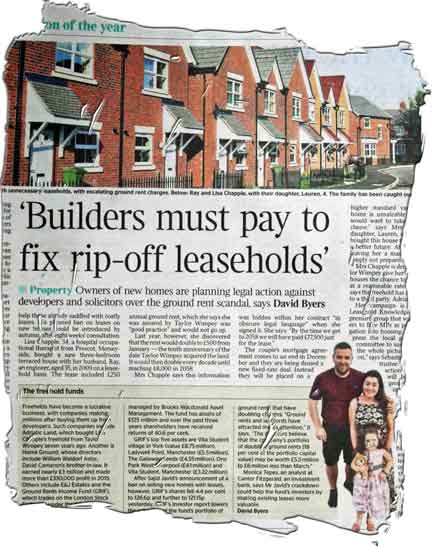 The article featured Lisa Chapple, 34, a hospital occupational therapist from Prescot, Merseyside, and her husband Ray, 35. Her ground rents are £250 a year doubling every 10 years, stating from last January.

“I bought this house to give my daughter a better future. At the moment I am leaving her a massive debt – and I simply not prepared to do that.”

It is only open to those who contact the company.

A woman who had to sell her flat, and therefore paid £14,000 to the freeholder who had acquired the title from Taylor Wimpey, has already been told that she is not eligible for assistance. Reported here:

Sebastian O’Kelly, of LKP, is quoted saying: “The reality is that this is going to cost them [Taylor Wimpey] a lot more than £130 million. We believe that the terms of the leasehold contracts were deliberately not spelt out to buyers.” 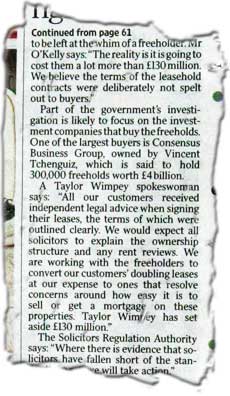 Guardian says: It’s time to send the feudal leasehold system crashing. Amen, to that
Next Post: Scandal makes Ground Rents Income Fund plc fall £6m since March but … it has paid out 40.6% in three years