Donate
You are here: Home / Michael Epstein / Is this what you intended, William the Conqueror? 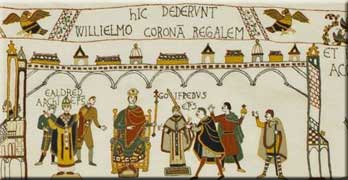 1066 was a long time ago, so I suppose we should all forgive William The Conqueror for invading and we could even be persuaded to turn a blind eye to whoever fired the arrow at King Harold?

What is not so easy to forgive though is William the Conqueror’s bright idea to buy loyalty, help raise funds and support his armies. Basically, he needed the noblemen of the country to be on side to maintain him in power. He could do this by granting such people land,

In return for this land, the noblemen would give William a sum of money every year.

That in itself is fine, but what were the noblemen to do with this land?

Clearly farming was a priority, so they could let peasants use the land to farm, which they could either pay for or agree that if the noblemen ever needed to supply men for an army for William they would enlist.

These feudal land tenures were known as a Fief and hence a Fee was paid. The more successful peasants could earn extra income by allowing poorer peasants to farm some of the land. The noblemen owned the land, which could be passed on to the next generation (which was known as Fee Simple) while the peasants could use the land, but could never own it.

Freehold and Leasehold were born!

In later years, instead of just farming, properties would be come to be built on freehold land, on the principles set up by William all those years ago.

So William, if you are reading this in your grave in Rouen, the mess leaseholders are in now is down to you! (And the developers)

Leasehold is a feudal legacy past its time