Roger Southam, the chairman of the Leasehold Advisory Service, has appeared in the newspaper Private Eye again this week (erroneously referred to as a satirical magazine by mainstream newspapers, which more closely resemble satire).

The article concerns the complaint by the Leasehold Knowledge Partnership that his role conflicts with his professional interests in leasehold property management.

It quotes the DCLG rejecting the complaint as his role as chairman and his business interests were “totally separate”.

This dismissal of the complaint has caused outrage at Mulberry Mews, a Taylor Wimpey London site, where Mr Southam’s Chainbow company owned the embedded management company in the lease.

Justin Madders MP also voiced his concerns about Mr Southam in the Commons on February 27. 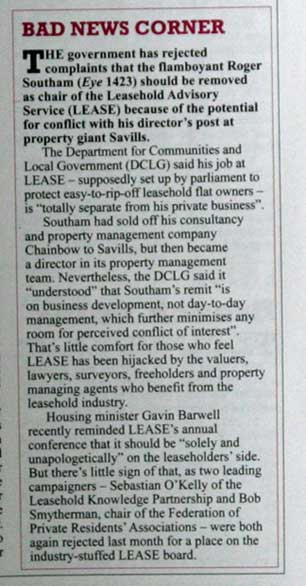 At Mulberry Mews, in north London, Chainbow owned the management of the site in perpetuity.

Leaseholders were told in writing, by both Taylor Wimpey London and Mr Southam, that the company – which under normal circumstances might have been a residents’ management company – was nothing to do with them.

After the involvement of LKP, Taylor Wimpey London rapidly changed its tune.

In a behind closed doors manoeuvre, Mr Southam was ousted – which was curious as Taylor Wimpey London had flogged the freehold to the mysterious Adriatic Land interests and so had had no legal involvement in the site – and persuaded him to hand over the company.

LKP then obtained two legal opinions and worked with Taylor Wimpey London to create articles and memoranda for a functioning residents’ management company.

This now manages the site, and has in fact appointed LKP-accredited managing agent Rynew, headed by Desmond Moreira, a long-time strong supporter of LKP.

Mr Southam since sold Chainbow to Savills at some point last year, so it is in fact the latter that has been given the boot at Mulberry Mews.

Private Eye also reports than both Sebastian O’Kelly, trustee of LKP, and Bob Smytherman, perennial chairman of the Federation of Private Residents’ Associations, were again rejected for positions on the “industry-stuffed LEASE board”.

In February, housing minister Gavin Barwell reminded LEASE at its humiliating annual conference that it should be “solely and unapologetically” on leaseholders’ side.

Sir Peter Bottomley joined the admonitions telling LEASE to cease hosting dodgy seminars on how to cheat leaseholders over issues such as insurance commissions.

‘If I fail to offend anyone, I will do it next time,’ Bottomley tells appalled LEASE annual conference

Since LKP’s complaint about the suitability of Mr Southam to continue in his role of chair, other complaints have come from the National Leasehold Campaign on Facebook.