Donate
You are here: Home / Latest News / Leasehold is a feudal, wasting asset with opportunities for exploitation, says the Financial Times in a devastating article 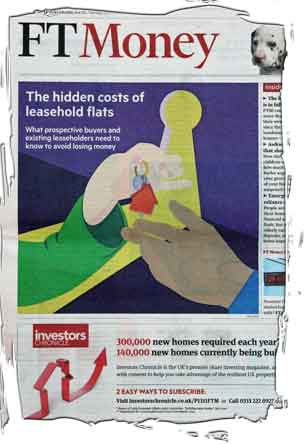 Leasehold properties make up 43 per cent of all new-build registrations with the Land Registry for England and Wales, and 3,000 of those were for leasehold houses.

That is one of the findings in the Financial Times’s three-page cover story in its FTMoney section, published this weekend.

The article, written by personal finance veteran Lindsay Cook – formerly of the Telegraph – is a brilliant overview of all the current issues facing leaseholders.

She even had a section on the Court of Appeal challenge to the methodology used to value short-term leases in the incredibly lucrative lease extension racket.

The current method was commissioned by the Grovesnor estate in 1996 – that is the Duke of Westminster, the country’s richest single freehold owner whose aristocratic ancestor had the good sense to marry Mary Davies, the daughter of a scrivener (scribe) but also heiress to a 500-acre farm on which today stands Mayfair and Belgravia. (See historical footnote below)

Chartered surveyor James Wyatt, of Parthenia Limited, is challenging this cosy, insiders’ carve-up with a more robust mathematical methodology. It was reported on LKP here

The FT, which is widely read abroad and by foreign nationals working in the City, adds up to a devastating criticism of the leasehold flat ownership in England and Wales.

It is headed: “Leasehold homes – what an estate agent won’t tell you”.

Proclaiming in its first line that leasehold is “a feudal form of tenure unique to England and Wales [that is] growing at unprecedented levels”, the article points out that 95 per cent of new build in London is leasehold.

“Leaseholders have a declining asset; they will never own the land on which their properties stand, they are liable to pay an annual ground rent and service charge for the management of their property, and generally have to ask permission before making substantial alterations.”

Leasehold became widespread after the war with modern housing, it said:

“As leasehold has expanded, so has the opportunity for exploitation.

“Yet there is effectively no regulation. In some cases, who challenge their bills can end up paying punitive costs.” 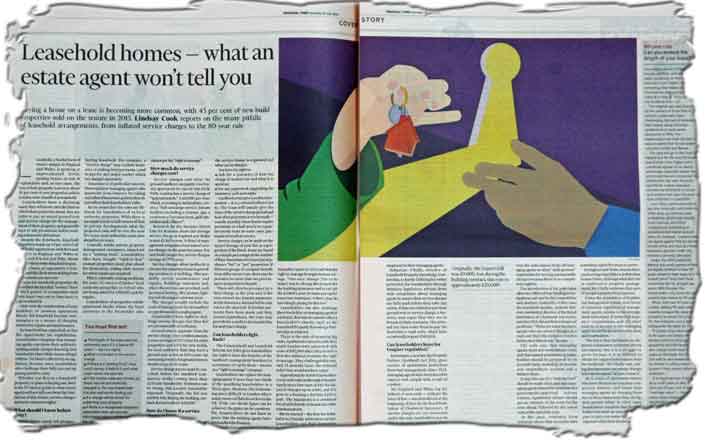 The article mentions the appalling issues facing Oxford City Council leaseholders who are having to pay £50,000 each for repairs to their block.

It mentions a flat for sale at One Hyde Park, the most expensive apartment block in the country, which has service charges of £161,000 a year.

Average service charges are £1,863, according to insurers Direct Line for Business, the article says. At new-build properties the figure is £2,777 a year.

Around 4,000 leaseholders a year seek redress through the property tribunal, says the FT, where application costs rise from £65 to £500.

Sebastian O’Kelly, a trustee of LKP, is reported to say that around 50 leasehold properties are forfeited every year. This is an estimate, as the Ministry of Justice claims obtaining an accurate figure would be “too expensive” (!).

Emma Reynolds, the then Labour shadow communities secretary, raised this issue in the Commons in March last year, but was brushed off

The Financial Times points out that ARMA, in spite of having a decent code of practice and a new regulator in the form of ex-Labour minister Sally Keeble, thinks the leasehold sector is so dirty that it requires statutory regulation (the wording here is LKP’s).

This would be similar to Scotland, where flat ownership is run on the same lines as the rest of the world.

England and Wales are the odd ones out here.

Would you choose a good night out, or 500 freehold acres of Mayfair and Belgravia? The two Mary Davies’s of Restoration England

In Restoration England there were two women in London called Mary Davies.

One was an actress and what today would probably be described as a sex worker. She caught the eye of Charles II and had an expensive portrait painted, before being given the push in favour of Nell Gwynne.

The other was the frumpish and pious new money daughter of a successful scrivener, or scribe.

Her astonishing dowry was the manor of Ebury, 500 acres of land north of the Thames to the west of Westminster.

For Cheshire baronet Sir Thomas Grosvenor, 500 acres of freehold property, even if a lot of it was a marshy rubbish tip, were far more attractive.

In 1677 he married Mary, which would later establish his family as one of the richest in the country – subsequently, the richest – and they were repeatedly promoted through the aristocratic ranks until eventually given a dukedom at the end of the Victorian age.

It was a slow and steady progression, rather than Vincent Tchenguiz’s brief rise and fall, and Mary’s acres remained largely untouched by the Grosvenors until the 1720s, when they developed the northern part – now known as Mayfair – around Grosvenor Square.

A few generations later, in the 1820s, their focus moved south – to what is now Belgravia – developing Eaton Square, Chester Square and other famous addresses. Later in the 19th century, the area of Pimlico was developed; this was sold in 1953.

LKP welcomes privatisation of the Leasehold Advisory Service, but why wait until 2020?
Next Post: Would you choose a good night out, or 500 freehold acres of Mayfair and Belgravia?