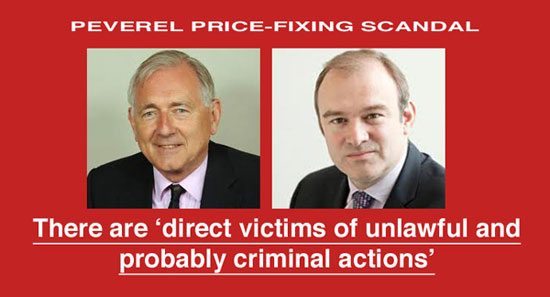 Sir Peter Bottomley (left), the Conservative MP for Worthing West, and Ed Davey (right), the LibDem MP for Kingston and Surbiton and the Energy Secretary, are combining forces to demand why the Office of Fair Trading offered a leniency deal to Peverel over the Cirrus price-fixing scandal. After a meeting with Campaign against retirement leasehold exploitation on July 30, Sir Peter issued an uncompromising email to the OFT insisting on answers. He referred to pensioners living in Peverel run retirement blocks as “the direct victims of unlawful and probably criminal actions”. The issue was raised with the OFT by three Campaign against retirement leasehold exploitation whistleblowers in a detailed dossier in January 2010. The OFT urged them to keep the inquiry confidential – which they did until the OFT announced that Peverel would qualify for “leniency” as it supposedly turned itself in in December 2009 – a matter of weeks before Campaign against retirement leasehold exploitation reported the scandal.

This decision has outraged the three, who have also been told that they cannot see the full “statement of objections” that gave rise to the OFT’s decision. Sir Peter believes that they have a right to see this “without delay”. This afternoon’s letter reads:

“Please, if possible without delay, put to the [OFT] Chairman Philip Collins and to the Chief Executive Clive Maxwell that Campaign against retirement leasehold exploitation, Ed Davey MP and I, with others who are the direct victims of unlawful and probably criminal actions, in addition to the cartel, need to see the Statement of Objections, redacted and preferably the unredacted version too without delay. “There is incontrovertible evidence that OFT had had reported to it directly concerns about overcharging: we all now know the effect of the cartel was a part of that. “Justice and recompense are needed. “We look forward to early effective information and discussion with OFT without delays.”

Ed Davey insisted that he himself had alerted the OFT to cartel-like practices for a number of services provided by the controversial property management company. Davey organised the Commons meeting of more than 100 leasehold retirement residents in November 2009, shortly after Campaign against retirement leasehold exploitation was formed. In addition, the Times newspaper reported in detail the scams involving Peverel’s subsidiary Cirrus, over warden call and alarm systems on December 4 2009. Peverel / Cirrus organised entirely bogus tendering processes which resulted in stooge companies making higher bids than Cirrus, which then won the contract. Evidence to date suggests that retirement leasehold blocks run by Peverel were plundered of around £20,000 each – and the Cirrus tendering only took place at sites with large contingency funds. Yet, as a result of the OFT’s unaccountable ineptitude over this issue, there may be no means to make Peverel to pay back the money that it wrongly took. The OFT inquiry is restricted to the years 2005-2009. The Tchenguiz Family Trust took over Peverel at the end of 2006 until it was placed into administration following the Tchenguiz brothers’ arrest in March 2011. It was bought out of administration last year by venture capitalists Chamonix and Electra. The Campaign against retirement leasehold exploitation whistleblowers feel that they have been deceived by the OFT, which urged them to keep the inquiry confidential, only to discover on July 5 that the OFT was not going to take any action against Peverel. In a further humiliation, the whistleblowers now realise that the inquiry only got underway in April 2011. Susan Wood, one of the three, said: “Why the wait?  They told us it was due to ‘resourcing issues, and having a number of other cases on the go’.  Maybe they are seriously under-resourced. “But I think that choosing to put on the back burner a case involving scamming old people, many of whom are now dead, throws into serious question their prioritising of decisions.” In November 2009, only a month before turning itself in, the then Peverel chief executive Nigel Bannister was quoted in the Times: