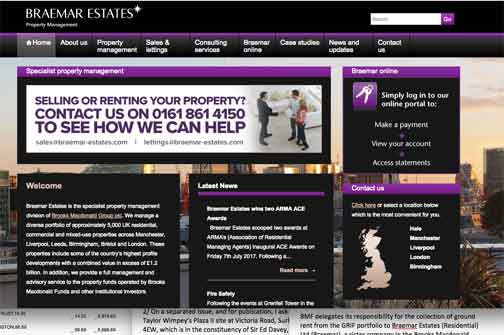 It owns some freeholds with doubling ground rents and has offered to transfer them to RPI.

Mr Agar has repeatedly stated that the Ground Rents Income Fund plc is “committed to being a socially-responsible landlord, working hard to treat all leaseholders in a simple, honest and transparent manner”.

It provided the following statement to LKP on September 25:

Ground Rents Income Fund plc (GRIF) is a closed ended real estate investment trust (REIT) incorporated in England and Wales in April 2012. The Company was admitted to the Official List of the CISX and to trading on the SETSqx platform of the London Stock Exchange (LSE) in August 2012. As a publicly listed company GRIF meets all necessary regulatory shareholder disclosure requirements.

BMF delegates its responsibility for the collection of ground rent from the GRIF portfolio to Braemar Estates (Residential) Ltd (Braemar), a sister company in the Brooks Macdonald Group.

Braemar is separately appointed by GRIF to manage approximately 14% of the leasehold properties within the GRIF portfolio. The remainder of the portfolio is managed by other, unrelated, managing agents.

GRIF, as the owner of residential freeholds, and Braemar, as property manager of the above mentioned minority of the GRIF portfolio, are not related companies and they are not under common ownership.

Furthermore, Brooks Macdonald Group recently announced (21 September 2017) the sale of Braemar to Rendall & Rittner Limited, with the sale due to complete by calendar year end.

GRIF Cosec Ltd is a wholly owned subsidiary of GRIF and does not own any freeholds itself, but provides secretarial services to the company.

As a point of clarification, Mr Agar is not the CEO of GRIF but is employed by BMF.

A copy of the RNS announcement outlining the action GRIF proposes to take in relation to doubling ground rents it owns is attached, as well as Brooks Macdonald Group’s announcement regarding the sale of Braemar.

Demo at First-Time Buyers show warns of developers’ leasehold rip-offs
Next Post: James Tuttiett: I have lost two buyers of my flat through ground rent scams. Can you hurry up changing my terms?