Donate
You are here: Home / Latest News / Will hedge-funders clean up in £500 million McCarthy and Stone float? 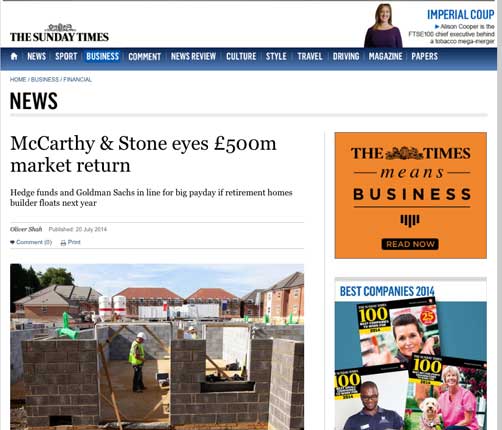 Both the FT and the Sunday Times are suggesting that the hedge-funders who took on the debt at McCarthy and Stone could be in for a killing if it floats next year for £500 million.

Both papers report that says hedge fund owners pumped £367 million of equity and a five-year loan to slash borrowings.

The Sunday Times claims reports that “in the six months to February, 659 properties were sold, up 30% on a year earlier, with underlying earnings more than doubling and the company swinging back into pre-tax profit”.

The FT, on Friday, is more cautious.

“All options are being considered”, including going public “but an IPO is not an immediate leading preference at the moment, the source said”.

The FT also points out that an IPO failed to materialise in 2012.

John McCarthy, the firm’s founder, commented sourly in his amusing and frank autobiography Building a Billion:

“Sure enough Peter Cumming’s over-lending on property brought HBOS down and his ill-judged legacy was passed to Lloyds.

“His advice was not to be relied on by his investors. Some very bad decisions were made and buying at the top of the overheated market was simply crazy.”

After a debt-for-equity swap in 2009, Lloyds was left with a 25 per cent stake, which it later sold to Goldman Sachs and the private equity firm TPG.

Together they hold more than 50%.

The Sunday Times cites an unnamed source “close to one of the shareholders” saying that a listing was the likeliest outcome and that it would probably happen in the first half of next year.

We will have to wait and see. 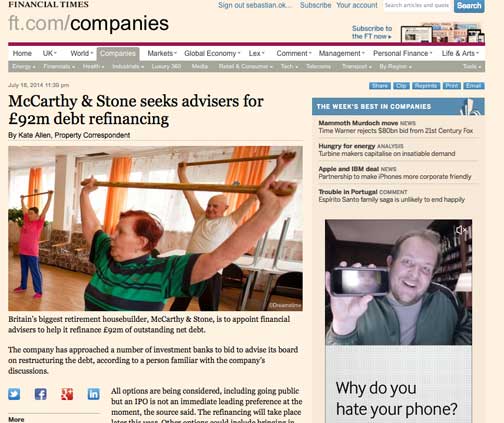 McCarthy and Stone and Churchill: are you blackmailing government over the ground rent ban and is your business model broken? Asks BBC R4 MoneyBox