Donate
You are here: Home / Latest News / Housing and Care 21: We’ve made a mess at Ashfield, so manage the site yourselves 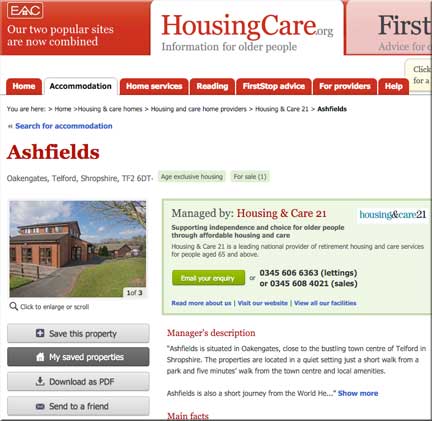 Housing and Care 21 handed over the management to residents at Ashfield, a retirement site in Telford in Shropshire, after admitting that it had been badly run.

For the past three months, the complex of 26 semi and detached bungalows with a community centre and flat above has been self-managed by the residents through a residents’ management company structure. A board of three directors have appointed a local managing agent to deal with the day-to-day administration.

On Wednesday two resident directors from the site, Judy Jones and Harry Butler, gave evidence to Lord Best’s All Party Parliamentary Group on Housing and Care for Older People.

To his considerable credit, the residents were invited to give evidence by Bruce Moore, the chief executive of Housing 21, who is on the panel of the APPG.

“We recognised that we were failing at Ashfield,” Mr Moore told the APPG. “If you cannot provide the service that is acceptable then someone else should do so.”

Sebastian O’Kelly, trustee of LKP, praised Mr Moore for handing over the management of a site.

He expressed the view that private freeholders and management consortiums would “walk over hot coals” before they would hand over the management to the residents.

Such a move would end their power and cut off numerous income streams. Mr O’Kelly referenced the case of Elim Court, whose right to manage application appears set to go before the Court of Appeal, with tens of thousands of pounds in balance depending on the outcome.

Self-management at Ashfield is in its early stages, but already there is more harmony and service charges have been reduced.

Their chosen managing agent is Nock Deighton, which is based only 10 miles away, and from April 1 the residents say they will be paying £27 a month less in service charges compared with last year.

The resident directors were questioned about what would happen if the management company fell apart. In such circumstances, Housing 21 would resume control.

LKP pointed out that this was a risk everywhere where residents, who are the overwhelming majority shareholders in a site, control their affairs. That is, in the rest of the world including over the border in Scotland.

Bickering between residents in flats, and major fallouts, are far from unknown elsewhere.

But it is only in England and Wales where a freeholder, with perhaps 5-10 per cent of the equity in a site, totally controls it and has enormous and unjustifiable powers such as forfeiture.

It is even more galling in retirement housing where the Tchenguiz organisation, which owns the old McCarthy and Stone freehold portfolio among others, runs its operations through a myriad of companies that are ultimately controlled by a supposed family trust offshore.

Metcalfe Court: how a retirement site has benefited from RTM

LKP suggestions prompt amendments to Housing Bill
Next Post: 20 MPs and Lords sign up for All-Party Parliamentary Group on leasehold and commonhold