The young barrister who represented for free the pensioners in the notorious ‘legal torture’ case at Oakland Court in Worthing is up for an award.

Stephanie Smith, a barrister in her twenties, defeated Justin Bates, who was acting for the freehold-owning landlord and is a more senior lawyer in her own Arden Chambers.

Bates is an expert on leasehold law who frequently represents freeholders in actions against leaseholders. He was instructed by Laceys solicitors of Bournemouth, who style themselves “honorary solicitors” to the trade body, the Association of Residential Managing Agents (ARMA).

The freeholders repeatedly challenged whether the Leasehold Valuation Tribunal should hear the case. When the pensioners eventually won the case in May this year, two of the original applicants had died.

The local MP Sir Peter Bottomley condemned these legal stratagems as “legal torture” on the LKP website and in the House of Commons. The case was referred to during the LKP briefing at Westminster for MPs, hosted by Sir Peter earlier this week. 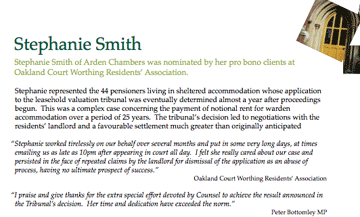 The residents eventually settled the dispute with the freeholder, the Oakland Pension Fund, whose beneficiaries are a local family, and accepted £68,500.

“We are immensely grateful to Sir Peter Bottomley MP for referring our case to the Bar pro bono unit, for his support throughout the year of legal torture, and to Stephanie Smith the specialist barrister instructed by the unit,” said Fenwick. “We feel that the LVT’s decision in our favour, which led to such a favourable settlement upon so many people in need, makes Stephanie especially deserving of recognition and she would be a worthy recipient of the pro bono award.   Naturally we hope that she wins!”

How semi-formal LVTs have become “legal torture” for leaseholders