An appalled reader who received an £850 subletting demand from the boss of Hallmark Developments has had the bill slashed to £100 after contacting LKP / Campaign against retirement leasehold exploitation.

Paul Couchman, of Stapleton in Bristol, received the demand after renting out his mother’s two-bedroom flat at Meadow Court in Braintree, Essex.

Under the terms of the lease, Couchman had to pay one per cent of the flat’s market value, estimated at £85,000. His mother bought the property for £120,000 in 2008 off Hallmark Developments, also based in Essex.

The site is managed by Peverel, which issued the demand.

But the freeholder is Stockbrook Investments Ltd, whose directors are Steve Everington, the managing director of Hallmark Developments, and Kerry Chamberlain.

The company shares the same address as Hallmark Developments.

Yesterday evening, Everington was apparently inflexible on the subject of the fee.

“The sub-letting fee is clearly stated in the lease as one per cent of the open market value of the property and until someone tells us that this is illegal we will continue to charge it,” he told Campaign against retirement leasehold exploitation.

Campaign against retirement leasehold exploitation had inquired about the fee by email, copying in to Sir Peter Bottomley, Couchman’s Labour MP Kerry McCarthy and Mike Lambourne, the Office of Fair Trading official who heads the exit fee inquiry.

“Please let me see the substantive response to this message of concern. I am prepared to have a Parliamentary debate on exit fees exceeding the level considered appropriate by the OFT.”

The OFT ruled in July 2012 that punitive exit and subletting fees in retirement leasehold constituted an unfair contract term.

In a deal with the Tchenguiz Family Trust, which owns the freeholds of 53,000 retirement flats, it was agreed that subletting fees be reduced to £85, even though one per cent of the market value is stipulated in the lease.

Other freeholders joined the agreement, although it is entirely discretionary.

After a night’s sleep, Everington had a change of heart.

“Having reflected on this issue, I can understand why Mr Couchman would feel unhappy being asked to pay this fee to approve a subletting which might only be short term,” he wrote.

“It is unusual for properties at Meadow Park to be let in this way. I have looked back through our records and can find only one case and on that occasion we capped the fee at £100.

“I intend to adopt the same policy here and will ask the agents to advise Mr Couchman accordingly.”

Peverel has no say in setting these fees, which it collects on behalf of the freeholder.

It would not comment on the number of subletting fees it raises that exceed the £85 (now £87.50) agreed between the OFT and Tchenguiz, Nor would it name the freeholders concerned.

It would have been commercial suicide for Hallmark Developments had the company that now owns this freehold – which has Mr Everington as a director – insisted on a subletting fee of £850.

This fee makes subletting a retirement flat – which has already collapsed in capital value by 30 per cent – unviable and is a relic of the worst excesses of retirement leasehold. 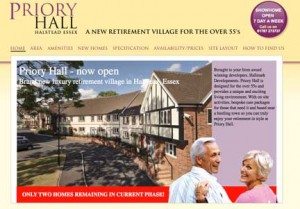 Mr Couchman has no idea how long his elderly tenant will occupy his property or be able to. Mr Everington did say – although it is not a condition of the lease and Mr Couchman was not informed  – that the fee would be valid for a year, irrespective of the number of tenancies.

With Hallmark Developments actively marketing Priory Place in Hallstead, it was sensible not to have the company’s subletting fees discussed in the Commons, which Sir Peter Bottomley stated that he was prepared to do.

There are now three court cases stacking up over exit fees, which are paid on a flat’s sale.

If you have paid these fees, which the OFT says are unfair but is leaving to pensioners and their heirs to fight in the courts, please get in touch with Campaign against retirement leasehold exploitation.

We can assist in preparing your case in the no legal costs small claim courts. 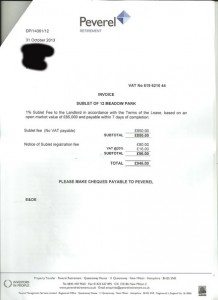 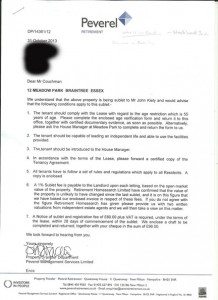 If you buy this flat, subletting fees are £10,000 … investors deterred from buying

Parliamentary Questions over Benjamin Mire case
Next Post: Freehold Managers demands £210 to sublet, with an extra £120 for each new tenancy …