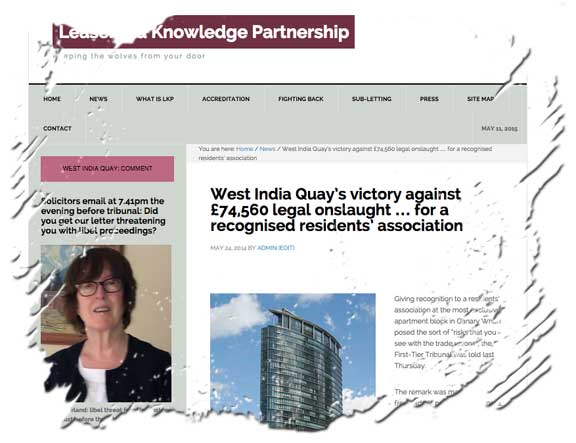 Anyone needing a reminder why recognised residents associations are important needs to recall why this freeholder spent £75,000 for an afternoon in the property tribunal trying to thwart one.

A recognised has the power to appoint a surveyor (in fact, au auditor) to go over the books.

Now there is a discussion paper out from the DCLG, which has asked officials to look for “ways to make it easier to get recognition for a tenants’ association”

DCLG who would like your input. You can read the paper here. Replies must be made by May 22.

Both ARMA and ARHM were invited but did not attend.

The views below are not intended to represent those of the attendees but reflect the concerns raised by LKP.

The hope is that the joint signatures and others will be able to make a joint submission along with submissions directly reflecting the concerns of each of the groups.

LKP is concerned that the key statement in the discussion paper:

“We understand that on the whole the guidelines work well, particularly in respect of individual blocks. However, we are aware that some difficulties can occur in larger blocks/developments and some mixed use blocks.”

This may face a number of problems:

1) The current guidance does not fall directly a guidance issues under s29 of the Act but is the courts’ procedural guidance that dates back to 1980. The guidance only directly applies when the leaseholders have reached the point where they are forced to take matters to the tribunal for a determination.

The fact that the guidance was drafted in 1980 pre-dates the move towards larger and mixed-use developments. As procedural guidance the courts are inevitably constrained from initiating substantive policy change.

2) In various parts of the sector, the leaseholder is faced by a variety of different terms and conditions that landlords deem themselves entitled to impose in the absence of practical guidance from DCLG.

3) Unfortunately, the DCLG discussion paper omits to mention the one real power available to a recognised tenants association and perhaps the real reason landlords often oppose these groups -the right of an RTA to appoint a surveyor (at the leaseholders own cost) who can then look at all matters which may give rise to a service charge.

The meeting considered cases such as West India Quay where the landlord felt it relevant to spend £75,000 in direct legal costs seeking to oppose an RTA even though they represented an overwhelming proportion of all the residential leasehold flats.

4) The meeting also considered major problems in the right of leaseholders to obtain details of their fellow owners so they could be contacted to help form an RTA or indeed the logistics of ever being able to form a group on a very large site.

The DCLG discussion paper advised “Information is already obtainable by exercising other rights such as section 11 of the Leasehold Reform Housing and Urban Development Act 1993 but:”

The lawyers letter from Oslwang mentioned in our Discovery Docklands East case claimed leaseholders have no rights under s11 was considered by the group. While Olswang were wrong it was suggested there was a lack of clarity on some of the rights provided under s11.

5) There is no consistency in the rules applied by landlords to RTA’s. Concerns were expressed that some landlords actively seek to discourage individuals from joining a residents association and even those who do not put obstacles in the way vary rarely point out why residents may want to form an officially recognised rather than informal group.

6) There is confusion caused by use of the term “recognised tenants’ association”. Many leaseholders believe themselves to be property owners, or at least leaseholders, rather than “tenants”. Indeed, many rent out these properties to “real” tenants on short-term assured tenancies.

This problem is also reflected by the confusing term “tenants” in the DCLG, where it is limited to the social and private rental sector while “leaseholder” is preferred for those who own a leasehold.

But, of course, in law leaseholders are just long-term tenants.

7) Concern was raised that there is no legitimate reason to set the default barrier to forming an RTA at 60% of all residential leaseholds in a site especially when there is no consideration made for the fact that those who choose not to join or prevent the formation of an RTA may be flats owned by the landlord.

More commonly, those who do not join are just leaseholders who simply cannot be contacted by the group.

LKP would argue there is not even a strong reason at least 50% of owners are needed unless there is clear evidence of two competing groups on a site. To our understanding the number of occasions where two groups exist is extremely rare.

8) Some landlords seek to impose rules are not included in the formal procedural guidelines. In the social sector some landlords demand the right to attend initial meetings when officers are elected, others demand proof of membership each year, there is no clarity on the obligation for a paid membership, no consistency in the period of recognition.

10) There are a number of inconsistencies between various of the government documents.

11) The inconsistent between number of members to form an RTA and the power’s provided under other laws which apply to the sector. It takes 50% of residents to form an RTM or to enfranchise which then provided far more powers than an RTA. The powers provided for a TMO to allow the social sector tenants to manage their sites requires only 20% of members to participate. So why does and RTA need 60%?

12) The argument that an RTA needs such a large membership because it must be “representative” fails to accept that an RTA has no powers to impose anything on those who are not members. It may as a group make recommendations on the appointment of a manager (in certain limited circumstances) but the landlord is not obliged to follow this recommendation. Almost all of the other powers mentioned in the discussion document are open to individual leaseholders.

Some of the suggestions made at the meeting:

1) There is no point in simply updating guidance when it may need the law to change to allow the full information needed by leaseholders to easily form a leaseholder group.

2) The government should actively consider that a recognised group should exist by default on all sites and only become unrecognised if leaseholders actively choose to withdraw.

3) That the percentage of membership needed to form a recognised group should exclude all properties owned by the landlord.

4) That any commercial element also be excluded from consideration because any issues they may raise would not fall under the jurisdiction of the tribunal.

5) That there be a standard set of guidance from DCLG to discourage landlords inventing a range of alternative models with different rules.

LKP thanks its patron Ed Davey, who lost his seat in the election
Next Post: Bottomley tells BBC he will fight on for leaseholders