Donate
You are here: Home / News / Government’s slightly wobbly response to the excellent report of the Communities Select Committee 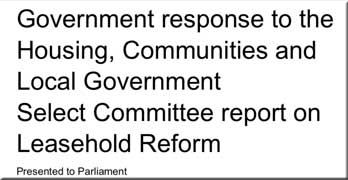 The government’s engagement with leasehold abuses is revealed in a lurching, one-step-forward and one-step-back reaction to the Communities Select Committee’s excellent critique of the sector, published today.

There are some good things, such as “unfair practices in the leasehold market that can turn people’s home ownership dreams into a nightmare”.

Leasehold houses are to be banned – is this the third time that that has been promised? –  but the government aims to:

“ensure that consumers only pay for the services they receive, and that people’s homes are theirs to live in and enjoy, not designed as an income stream for third party investors, by restricting ground rents on newly established leases to a peppercorn (zero financial value).”

Hurrah! Committing to zero ground rents is excellent. Well done, Mr Brokenshire; well done officials at the MHCLG for getting this right.

It will also clamp down on “unjustified legal costs” faced by leaseholders in the tribunal.

“The Government is pleased to see that many of the recommendations made by the Committee align with the Government’s existing reform programme.” That is, reforms “as soon as parliamentary time allows”.

This is a bit fuzzy, and problematical given that landlords can get their legal costs under the lease, but worse unfortunately …

The government still thinks that leasehold is a legitimate form of home ownership while, contrariwise, saying it is “a type of long-term tenancy; it is not the same as outright ownership”.

So, which is it? There is no scope for schmoozing both ways on this.

The adoption of the term “lease rental”, which the Select Committee urges …

“could risk perpetuating a misconception that they are not truly homeowners. It also risks undermining future sales of leasehold properties for existing owners”.

Er … well, the Select Committee does not think that this is a misconception at all.

Besides, isn’t it the case that any reform of leasehold, by acknowledging that there is a problem, potentially undermines the value of these assets? However, nothing undermines them quite as much as the games freeholders play to monetise these assets whilst unreformed. So, what to do?

Commonhold is an alternative, and government says it “supports the increased use of commonhold and wants to see more commonhold developments”. Which is good-ish.

But commonhold is being considered by the Law Commission, so government gets out of thinking too deeply about this one at this stage.

The government also addresses the mis-selling scandal that has dumped 100,000 home buyers into unsellable homes, but it has passed the problem on to the Competition and Markets Authority. It will now wait on events.

On the issue of whether developer recommended solicitors dobbed their supposed customers, the home buyers, into the mess of doubling ground rents etc, the government goes all coy:

“We note that recommendations regarding firms providing particular services e.g. conveyancers can sometimes be helpful where consumers are unfamiliar with the legal process, however consumers must have confidence that advice provided is made in their best interest.”

The Select Committee urged action on behalf of those duped into buying these toxic assets, but there is little here for them.

On lease forfeiture, the government is a bit hesitant even though there is a Law Commission recommendation to remove this nuclear weapon from the hands of often quite spivvy freehold owners:

“Changes to forfeiture will require a careful balancing of the rights and responsibilities of landlords and leaseholders. Any changes will also require primary legislation. As a first step, we have asked the Law Commission to update their 2006 report, given the passage of time, and to take into account the implications of the reforms currently underway.”

So, that’s a fail for LKP, which has given a number of examples over the years where leaseholders have lost their homes for trivial reasons to the landlord.

Regulating freeholders? This surely a red herring. How do you regulate an entity offshore where the beneficial ownership is hidden?

Then we get to a weirdly unbalanced defence of the Leasehold Advisory Service, which was humiliated by the Select Committee (and declared unfit for purpose by the London mayor’s office).

The Communities Select Committee expressed the view that:

“We are concerned that the only government-funded service for leaseholders continues to have such a poor reputation among many leaseholders.”

Its poor reputation is completely justified: the Leasehold Advisory Service did not warn ministers that plc house builders were cheating home buyers with doubling ground rents – the Leasehold Knowledge Partnership did.

There is not one single reform of the leasehold sector currently being considered that has originated from this organisation.

On the other hand, its chief executive felt ground rents of £250 and no more than 0.1 per cent cent were fine.

But far worse is the Leasehold advisory Service’s long history of sucking up to the commercialisers in the sector and serving their interests by  hosting seminars on how to get one over on leaseholders, which is the polar opposite of what the organisation is funded to do.

Here is an example:

It is a curious sort of government funded organisation that has to be reminded – repeatedly, apparently – that it is supposed to be on the side of the taxpaying consumers that help fund it, not the entities seeking to rip them off.

Here is a former housing minister telling it off publicly:

The government rejects the criticism and says that it has appointed a former British Airways marketing executive Wanda Goldwag as interim chair in January 2019 and that she has worked wonders:

“Ms Goldwag’s appointment is pivotal in ensuring that the Leasehold Advisory Service is an effective organisation. She has already had a positive impact and has made it clear that the organisation is on the side of leaseholders and that it only provides support and information to leaseholders and park home residents.”

Ms Goldwag’s only public impact to date has been to decline to endorse zero ground rents on BBC Radio 4 – which the government has just endorsed, so she called that one spectacularly wrong – and to cheer on the government’s wobbly code of practice for freehold owners. Of which, verdict awaiting,

In addition, she has caused offence among leaseholders for her appalling behaviour.

In April she attended a meeting with LKP, the National Leasehold Campaign and the All Party Parliamentary Group on leasehold reform. The aim was to get these voluntary organisations to work more positively with the Leasehold Advisory Service.

Instead, she chose to launch into a foul-mouthed and intemperate attack on LKP in general and the character of its unpaid volunteer chair Martin Boyd.

This is now the subject of a formal complaint to the MHCLG.

The Leasehold Advisory Service does do some good work and has some dedicated officials.

Her appointment is “interim chair”. Let’s hope the “interim” nature of it means that her departure is not unduly postponed.

‘The genie is out of the bottle,’ three lawyers solemnly explain to industry insiders in Estates Gazette
Next Post: Seize ‘golden opportunity’ offered by Help To Buy 2021 to end taxpayer-funded spread of toxic leasehold, urges Tory MP