Donate
You are here: Home / Latest News / Housing association Network Homes seeks to dump some of its £200m cladding costs on leaseholders 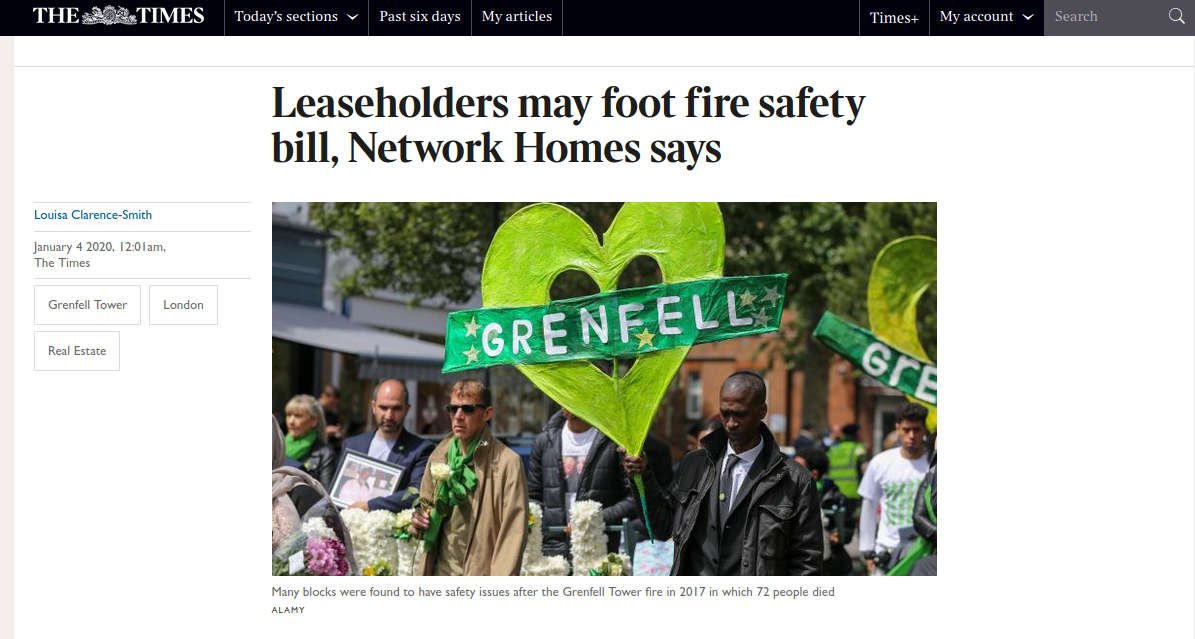 The housing association Network Homes claims remedial work to replace combustible cladding would total more than £200 million across its 20,000 flat portfolio and private leaseholders should pay their share.

The figures emerge in a report in The Times, where Network Homes claims remedial work will cost more than £100,000 a flat.

Some or all of the 4,000 private leaseholders would face ruin if presented with such bills. Many bought using Help To Buy or have signed shared ownership contracts.

“[Network Homes] said that it had spent about £2 million already on investigations and interim measures to keep residents safe in buildings where issues had been found, which it does not plan to charge to leaseholders. However, it said that housing associations, which have charitable status, cannot accept blanket responsibility to pay for costs that legally are the responsibility of leaseholders.”

“Helen Evans, chief executive of Network Homes and chairwoman of the G15 group of London’s largest housing associations, said: “Unless the government categorically confirms it will fund this work, then we will have to soon put our leaseholders on notice that they could be liable for some of these costs. Across the board as housing associations investigate their buildings, we’re finding almost none have been constructed as they should have been.”

The government has committed £600 million to replace aluminium composite cladding, the type of cladding used at Grenfell. However, building owners are responsible for the removal of other types of dangerous cladding or insulation.

The Times quoted an MHCLG official:

“We’ve acted swiftly to ensure residents are safe in their homes and recently announced the largest reforms to building legislation in nearly 40 years. Our guidance is clear that building safety is the responsibility of building owners and we have given expert advice on a range of safety issues to provide clarity.”

LKP, the only organisation to have organised Westminster meetings on the cladding scandal, is holding another All-Party Parliamentary Group meeting on January 9th at 5pm.

Leaseholders are urged to encourage their MPs to attend.