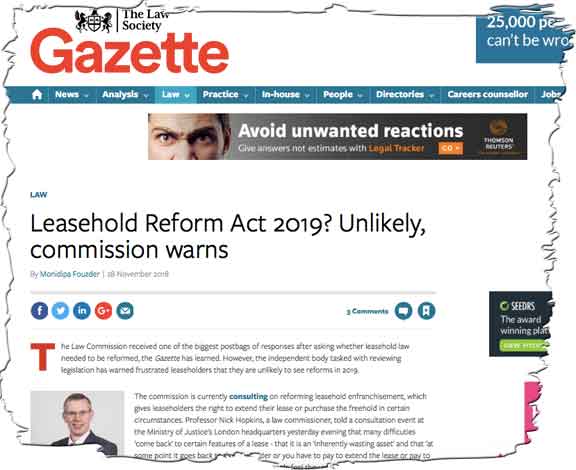 Speaking at a consultation exercise at the Ministry of Justice on Monday, Professor Hopkins said that his team is working to an “accelerated time-table”, but that new legislation on leasehold would take at least four months to pass through Parliament. That is, assuming there is parliamentary time for it.

The Law Commission received one of the biggest postbags of responses after asking whether leasehold law needed to be reformed, the Gazette has learned. However, the independent body tasked with reviewing legislation has warned frustrated leaseholders that they are unlikely to see reforms in 2019.

Although leasehold reform has a high profile, Professor Hopkins hinted that Brexit fallout meant it would be inconceivable to get leasehold reform through Parliament next year. It “is under certain other pressures at the moment. You’re not going to see a Leasehold Reform Act 2019,” he added.

In a boost for leaseholders of flats in mixed-use blocks, the Law Gazette reports that attendees raised objections to the bar on collective enfranchisement for leaseholders where 25% of the building is commercial.

The Law Commission has endorsed this restriction, although it is open to consultation. LKP regards 25% as an arbitrary cut-off as leaseholders have the majority financial stake in a building but remain disempowered.

Poisonous leasehold disputes in mixed-use sites, such as those at Canary Riverside and West India Quay, have witnessed leaseholders thwarted because of this rule.

At the LKP meeting earlier this month at the Law Society, in central London, Professor Hopkins stated that the government has already made a clear political judgment. This informs the work of the Law Commission, with the key insight being “the lack of autonomy and control leaseholders have because of the nature of the relationship with their landlord”.

The Law Commission introduction stresses that leasehold is NOT home ownership, but a form of tenancy agreement. This is something LKP would like to see adopted in developers’ advertising and estate agency.

A consultation on commonhold is also to be launched next month.

Reform laws on track for ‘second half of 2020’, Martin Boyd tells Property Week

Is Law Commission wobbly over 25% commercial exclusion to collective enfranchisement? (Let’s hope so)