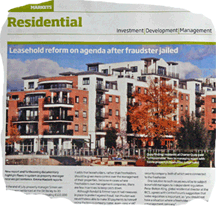 Managing agents Rendall and Rittner has “initiated a series of internal and external reviews of our systems and procedures” following the jailing last month of its employee Simon Van Houten, 31, for stealing £122,000 of leaseholder’s funds.

Richard Daver, the managing director of the company, is quoted in today’s Property Week, as saying the company is “confident we have strong procedures in place to prevent a reoccurrence”.

In the same article, which covers the mounting pressure for leasehold reform with the Channel Four Dispatches programme and the CentreForum report, Sebastian O’Kelly of the Leasehold Knowledge Partnership is reported as saying that the Van Houten case was “to a large extent bad luck for Rendall & Rittner”.

In making the case to stop building more leasehold, O’Kelly said that the law had to go through somersaults to make leasehold fair.

“There’s no other part of civil law where private individuals can compulsorily buy the property of someone else,” he is quoted as saying. “That had to happen [with enfranchisement] to make leasehold work. So that must be telling you something.”

O’Kelly has frequently urged housebuilders to build commonhold tenure, which applies throughout the rest of the world, apart from England and Wales.

“That’s our dear old housing minister’s mantra, isn’t it? The fact is that the government might think the industry can do it, and the industry tries hard. But we can’t turn round to someone who is not a member and is nothing to do with us and start saying, you should be doing this, that and the other.”

The Leasehold Knowledge Partnership would dispute that discredited organisations such as ARMA and ARHM made any effort to curb the activities of their own members, several of whom have repeatedly lost cases and received stinging criticism from the Leasehold Valuation Tribunals.

Having fraudster Simon van Houten manage our flats cost us £100,000