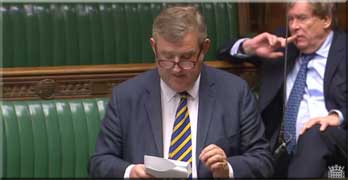 Oliver Colvile MP raised the issues of right to manage and insurance claims at two retirement sites in Plymouth: Elim Court and Regent Court, whose freeholds were acquired by London freeholders at auction.

The issues have been reported on many occasions on LKP /Campaign against Retirement Leasehold Exploitation: Elim Court and right to manage and Regent Court

I congratulate the hon. Member for Poplar and Limehouse (Jim Fitzpatrick) and my hon. Friend the Member for Worthing West on securing this incredibly important debate. I also thank them for their stewardship of the all-party parliamentary group on leasehold and commonhold reform.

The Elim Court case has attracted national attention to right-to-manage law. Elim Court’s RTM company, which was established for this purpose, made an application to acquire the right to manage a block of flats at Elim Terrace in Plymouth under part 2 of the Commonhold and Leasehold Reform Act 2002. The Act created a no-fault right to manage, under which, on satisfaction of some preconditions, a qualifying majority of tenants of a building containing leasehold flats can establish an RTM company to take over management of the building from their landlord. The no-fault part of the Act meant they did not have to show fault in the way the building was managed.

Elim’s landlord declined to participate in the RTM process and opposed it through the Leasehold Valuation Tribunal—now more commonly known as the first-tier tribunal—which accepted his arguments on a technicality. On appeal, the decision was upheld, and the case thrown out. My constituents in Elim Court have been battling for years for the right to manage their property. The legal system that was put in place in 2002, while welcome, is in desperate need of vast improvement.

This really is the tip of the iceberg. Since its inception in 2002, the right to manage has proved popular with leaseholders who want to take control of badly managed blocks. However, it is an over-complicated scheme, riven with pitfalls and technicalities that are difficult to overcome without sound legal advice. I have been told that gaping holes have emerged in the 2002 legislation that need to be addressed urgently due to the increase in RTM applications and to landlords refusing to release their tight grasp on highly lucrative management arrangements, while finding every possible loophole to thwart applications by leaseholders and residents. That is an abhorrent way to treat anyone, let alone the retired and the elderly.

A further issue that Elim Court and Regent Court have encountered is the high costs involved in tribunals and appeals, which have, indeed, become something of a cash cow for lawyers. The fact that RTM is so plagued by loopholes means that the no-fault basis on which leaseholders can obtain the right to manage is proving costly. Currently, Elim Court is awaiting a hearing at the Court of Appeal—as I explained earlier, the process has been highly expensive. If the residents were to walk away now, they would be set to lose between £25,000 and £30,000—a very large amount.

Through my hon. Friend, may I suggest that the Law Officers look to see whether they can take over the case and carry it forward at public expense? If this is a question of justice and law, it is about time Justice Ministers got involved.

I thoroughly agree, and I thank my hon. Friend for giving such clear advice, as he generally does.

I would now like to go into further detail about the Regent Court case. In 2012, during severe storms in Plymouth, the roof blew off the building. No insurance claim was paid, leaving the leaseholder with a staggering £114,000 bill. The insurance company, AXA, claimed that the condition of the roof previously would have voided the policy, prompting the landlord to seek to recover £140,000 from the leaseholders—more than the bill for the roof repairs.

After much investigation, the ombudsman has only just reached its wholly unsatisfactory decision, declining to investigate whether there was a fault in the claims-handling process, because the insurance company had asked it not to. It remains unclear whether the landlord withdrew the claim or it was withdrawn because it was disputed. What I have learned recently is that the loss adjuster’s report may have missed key information that would have meant that the claim should have been paid out to the leaseholders.

The case illustrates that leaseholders have few rights if the insurance company and the freeholder do not want a matter investigated. Again, elderly residents are being treated in this way. Regent Court is a particularly shocking case, as the landlord has not had an interest in managing the building since the second half of 2013, when the leaseholders took control via their RTM company.

The House is following this case keenly. Is my hon. Friend telling the House that the freeholder had the responsibility to make sure the roof was maintained, but did not, and that he had the responsibility to deal with the insurance, but it was apparently not valid or he was not going to claim on it? The leaseholder therefore failed doubly—in terms of the cost of the roof and the cost of the insurance.

That is exactly the position, and it certainly needs to be looked at.

The ombudsman’s decision highlights the fact that millions of leaseholders face the same position across the country. Some landlords also happen to own an insurance broker, as we heard earlier, creating loopholes and conflicts of interest across the board. The Financial Conduct Authority is fully aware that leasehold building insurance is a problem and has reported that high commissions—up to 40%—have been paid on insurance. In 2014, the Competition and Markets Authority investigated leasehold property management, and one of its specific recommendations was that the FCA should look into the matter.

I would like to see a more flexible, more transparent and less complicated system for RTM, insurance issues and service charges for leasehold properties. The current system has been picked apart by lawyers, and the original Act is not fit for purpose. I urge the Government to relook at leasehold and commonhold reform and to sit up and realise that possibly millions of people across the country face very real blockades, when all they want to do is manage their own property—a right this Parliament gave them almost 15 years ago.

To conclude, it seems almost unfathomable that we expect pensioners to cope with some of our most complex legislation. If we in Parliament do not understand the process, and officials do not understand the process, why on earth should we expect these elderly consumers to? It may be too late for the residents of Elim Court and Regent Court, although I am keen to pursue those issues, but we owe it to future leaseholders to ensure that they are not swindled out of hundreds of thousands of pounds by greedy landlords and cowboy insurance companies.

Tribute to housebuilder Bob Bessell, who says ground rents have no justification
Next Post: Tchenguiz ‘skulduggery’, Peverel / Cirrus bid-rigging scam and Charter Quay: all get another outing