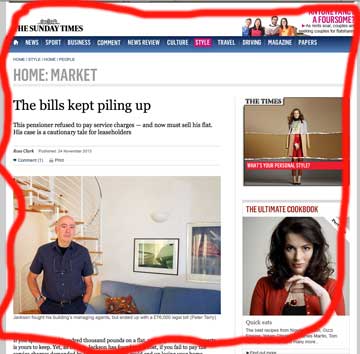 The case of Dennis Jackson, 74, who came within a hair’s breadth of losing his Battersea flat at Plantation Wharf in a forfeiture action earlier this year, featured in the Sunday Times on November 24.

The case is still on-going as Jackson is trying to sell his flat, on the market for £800,000, to pay off debts accumulated by freeholder’s legal bill.

Forfeiture was actually granted in January before the Leasehold Knowledge Partnership managed to galvanise support and overturn the ruling on the 26th day before it became absolute after 28 days.

It took the efforts of Sir Peter Bottomley, MP, and senior executives at the Prudential, Jackson’s lenders, to overturn the forfeiture. 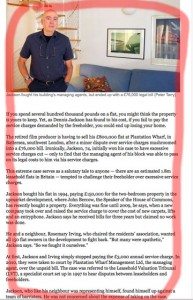 Sir Peter referred to the Jackson case and called for an end to the “archaic procedure of forfeiture” at a meeting of the Federation of Private Residents’ Associations on November 12.

The veteran Conservative MP was also stinging in his criticisms of lawyers playing the system in leasehold litigation.

Even Jackson’s freeholders, Cube Real Estate, were aghast at the legal fees racked up during the case by solicitor Janice Northover and barrister Alexander Bastin.

Stuart Loggie, of Cube Real Jackson, contacted Sebastian O’Kelly, of the Leasehold Knowledge Partnership, to meet after the forfeiture order was revoked.

The meeting took place with Sir Peter Bottomley at the MP’s Westminster office.

Loggie emphasized that he had absolutely no wish to forfeit Jackson’s property or receive an unexpected windfall of £800,000 in the company books.

He was well aware of the reputational catastrophe that would have followed had Cube reduced a pensioner to penury and homelessness.

Jackson was the victim of a legal fee feeding frenzy that no one was prepared to halt. 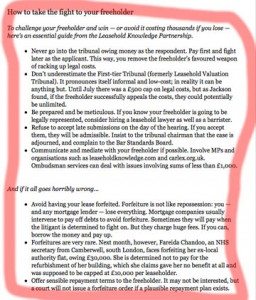 Dennis Jackson at Plantation Wharf: An £800,000 forfeiture over-turned by LKP