Unless a deal is brokered, retired photographer Jackson, 73, has until February 27  to pack his bags and get out of the attractive split-level apartment in Battersea in south London. He has been living there for 16 years.

Sir Peter Bottomley, Tory MP for Worthing West who has an interest in leasehold issues, has urged Jackson’s lenders, the Prudential, to intervene to prevent the flat being lost.

Three years ago Jackson refused to pay £9,000 in service charges for works he says were never carried out and was taken to the Leasehold Valuation Tribunal. But although he won some points, the freeholder, Cube Real Estate, successfully argued that its £70,000 in legal costs be awarded against him.

On January 30, his lease was forfeited at Wandsworth County Court. Forfeiture of a lease – which is not the same as repossession – means that Jackson will lose all the equity he has in the property amounting to more than £600,000.

“I face absolute ruin because of this,” says Jackson. “I was arguing about service charges for items such as new hallway carpets and now I face losing my home and my entire life savings.

“I am looking at complete and utter destitution.”

The Leasehold Knowledge Partnership claims that this is the worst case of forfeiture it has encountered.

“This is not remotely justice,” said Sebastian O’Kelly, of the Leasehold Knowledge Partnership. “An argument over £9,000 becomes a legal bill of £70,000 and now a totally undeserved windfall for the freeholder of £800,000. Nothing better illustrates the absurdity of English leasehold law than this.

“If the forfeiture order is not overturned, it will be a national scandal.

“A flat owner with a reasonable dispute has been totally destroyed  – as things stand – by the imposition of huge legal fees which the Leasehold Valuation Tribunals were set up to avoid. Lawyers acting for rich freeholders have found ways around the protections Parliament created for leaseholders. This is a licence for freehold owning landlords to bully and intimidate ordinary leaseholders with massive legal costs.”

The case has appalled veteran Tory MP Sir Peter Bottomley, who has an interest in leasehold abuses.

It was agreed between Jackson’s solicitors and the Prudential, that the mortgage lender would pay the legal fees – as its own interest of £175,000 would also be lost in the forfeiture.

But the Prudential’s legal team did not turn up at Wandsworth County Court where the forfeiture was granted on January 30.

“To my understanding the Prudential had asked to be joined to this forfeiture action as a way of protecting your interest and that your solicitors had advised you wished to go forward with a consent agreement, with the Prudential meeting the legal costs and then adding them to Mr Jackson’s mortgage. I also understand the Prudential had agreed to attend the court forfeiture hearing on the 30th Jan to advise this position but did not arrive at the hearing.

“The Prudential (in)action has the result that Mr Jackson’s home was forfeit even though he had only had a few days notice of the hearing with courts mistakenly sending all correspondence to your solicitor only who had not forwarded details of the hearing to Mr Jackson.”

Prudential’s executive director, and board member, Rob Devey is handling the issue.

Sir Peter has proposed raising the issue in the Commons as an Early Day Motion, and is meeting Housing Minister Mark Prisk later this week.

Jackson disastrously represented himself in a series of Leasehold Valuation Tribunal actions, the redress tribunals for leaseholders where costs are supposedly limited to £500.

But Cube Real Estate solicitors successfully argued that their costs be met as an “administrative charge” – making Leasehold Valuation Tribunals indistinguishable in cost terms to the ordinary courts.

The disaster of forfeiture actually being granted came about owing to bungling between solicitors.

Jackson’s legal team agreed with the Prudential that the Pru would pay off Jackson’s £70,000 legal debt, which would be added to the mortgage.

This would protect Prudential’s investment in the property and allow Jackson time to sell his flat, which is on the market at £800,000.

As it happened, the Prudential’s lawyers did not turn up at the court and no argument was made to counter the forfeiture claim.

It is to be hoped that the parties involved can broker a deal before February 27, or the freeholder walks away with an £800,000 prime London property.

The court’s forfeiture order says that “The first defendant [Jackson] give the claimant possession … on or before 27 February 2013”. It adds:

“If you do not do so the claimant can ask the court, without a further hearing, to authorise a bailiff or High Court Enforcement Officer to evict you. (In that case, you can apply to the court to stay the eviction; a judge will decide if there are grounds for doing so.)”

The court order is reproduced below: 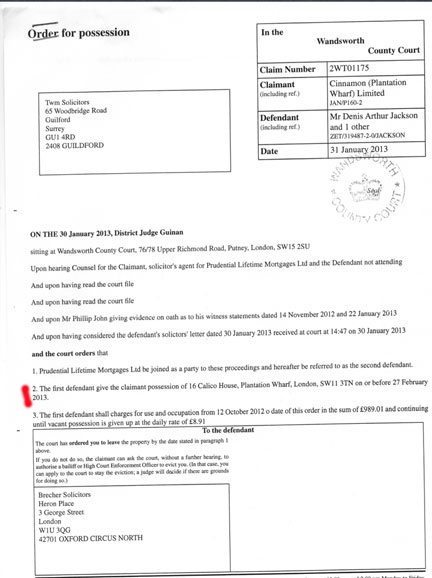