Donate
You are here: Home / News / Sorry leasehold right to manage is ‘somewhat daunting’ says junior minister … but I’m not going to do a thing about it 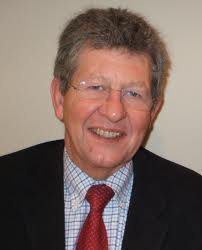 Junior minister Don Foster (left) has defended his remark that the elderly and the vulnerable find exercising leasehold right to manage as “somewhat daunting”, which some leasehold residents find somewhat insulting.

Foster, who was made a parliamentary under secretary of state for the Department for Communities and Local Government in September 2012, says: “As this is a concern which a range of leaseholders have themselves expressed to me and to my colleagues, I cannot share the view that this is an insulting remark and it was certainly not intended as such.”

Foster’s remarks are made in a letter to fellow LibDem MP David Laws, who is the constituency MP of Campaign against retirement leasehold exploitation activist Brian Reeves.

Many leaseholders are indignant that right to manage, which was introduced by the Labour government in 2002 as an important protection for leaseholders, is being thwarted by freeholders using every legal stratagem possible to frustrate the process.

Often the most belligerent freeholders also own or have an interest in the property management and are busily monetizing the asset with stealth commissions from insurance, energy suppliers, kick-backs from suppliers such as builders … as well as outright loaded service charges.

These abuses have been successfully challenged repeatedly at Leasehold Valuation Tribunals. This is why the leaseholders at St George’s Wharf in Vauxhall, central London, were repaid £1 million. It is why the leaseholders at Charter Quay, Kingston, received £500,000 in four LVT rulings. It is why Strand Court in Rye, a retirement complex, got back £11,500 from Peverel, which received stinging criticism in the ruling last year.

The reason why leaseholders find this reference to “somewhat daunting” – which has been repeated in other minister’s correspondence – somewhat insulting is because right to manage is not working as Parliament intended.

The leaseholders at Elim Court and Regent Court are locked in a desperate legal battle with their landlord, which will involve senior legal representation and appeals to the Land Tribunal. The claimed legal costs to be paid by the loser will be more than £30,000.

At Kingsmere in Brighton, where the leaseholders employed a lawyer who is a supposed expert in leasehold issues, were left with a legal bill of £33,000 after their right to manage was bungled in 2012.

Right to manage needs to be much easier and there needs to be more of it. Only by creating a market with a decent degree of “churn” will managing agents serve the interests of leaseholders, rather than serving those of the freeholders (and themselves).

Widespread right to manage would also help break up the overlarge – and controversial – managing agents who were doled out these contracts by the developers.

It is estimated that there have been only 4,365 right to manage applications since 2003, according to Paul Walentowicz, senior lecturer in housing at the Anglia Ruskin University in Chelmsford,

Ministers should ask themselves why right to manage is being hindered so determinedly – and why are Parliament’s intentions on this issue being frustrated.

Foster has been a good deal more attentive to his own housing requirements than he is to those of leaseholders. On 13 October 2009, Foster became involved in the parliamentary expenses scandal as he announced that he was being asked to pay back a substantial sum of money in connection with a mortgage he had been claiming for. It was later revealed in the local press that the sum totalled £4,082.02.

Foster’s correspondence is published below. 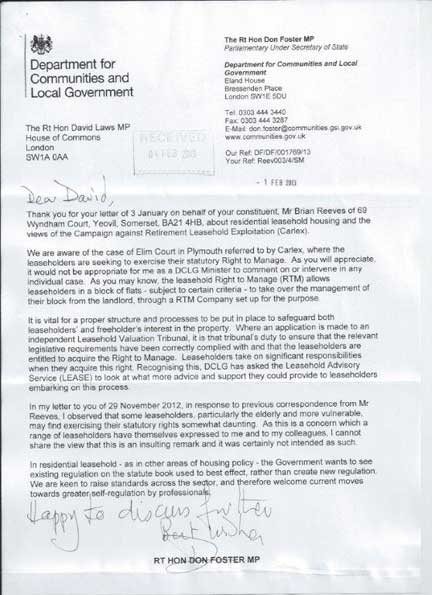