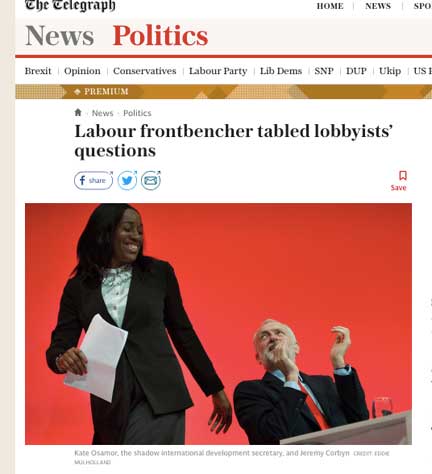 Labour frontbencher Kate Osamor asking a series of parliamentary questions on behalf of ground rent speculators lifts the lid on lobbying for the sector.

Long Harbour is run by William Waldorf Astor, half brother of Samantha Cameron (the wife of the former Conservative prime minister) and heir to a viscountcy.

For six years Mr Astor worked for residential freehold financier Vincent Tchenguiz, and the Long Harbour business model bears a strong resemblance to that of the Tchenguiz model.

LKP has also repeatedly invited Mr Astor to present to the All Party Parliamentary Group on leasehold reform, which would have the advantage, presumably to all, of making his lobbying transparent.

The Daily Telegraph claims that Pagefield approached Ms Osamor, the MP for Edmonton in north London, for a meeting days before she submitted the questions on July 9.

These included asking James Brokenshire, Communities Secretary, if he had considered the ­“potential effect on the viability of the leasehold sector” of regulating ground rents or removing the costs altogether, as well as about the “implications” for the building of affordable homes and “the level of house building in each ­region”.

The questions appeared to be an effort to gauge the degree of research undertaken by civil servants into the effects of “setting ground rent to as low as zero”, as the government is pledged to do.

“The Telegraph understands that Pagefield is coordinating a campaign on behalf of five firms in the leasehold sector, including Long Harbour.

“It is running a parallel campaign for the same group of firms against government efforts to force them to replace cladding on their buildings that is similar to that used on Grenfell Tower.”

Pagefield declares Long Harbour as a client in the lobbying industry register, but declined to say why the other firms were not also listed.

Long Harbour lobbyists also met LKP patron Jim Fitzpatrick MP, having repeatedly declined to do so if LKP were also part of the meeting.

Mr Fitzpatrick described their presentation as slick and plausible, although it was never likely to make much progress with one of the most active MPs calling for reform of the sector.

LKP, as secretariat of the All Party Parliamentary Group on leasehold reform, has repeatedly invited Mr Astor to attend its meetings. Lord Astor, his father, is a member of the APPG and has attended once.

Our invitations stand as a means to ensure that those seeking to influence the political process on leasehold do so openly.

Long Harbour told the Telegraph: “We were pleased to be able to help inform Ms Osamor’s parliamentary questions which sought to better understand the Government’s timetable and approach to reform… There is nothing new in companies… helping parliamentarians as they go about their important ­business of questioning ministers.

Asked about the coordinated ­campaign in relation to cladding, Long Harbour said that it was attempting to “move ­forward the current slow progress of ­implementing the warranties for the apartment blocks we have which are affected by ACM cladding.”

Some of its freeholds are owned through offshore entities such as Abacus Land 4 Limited based in Guernsey, where the beneficial ownership is hidden.  It will be taking the decision on cladding issues faced by unaffluent families at Heysmoor Heights in Liverpool.

Baz Jafar, a leasehold activist and constituent of Kate Osamor MP wrote to her yesterday:

The Times has recently written about the fact you have met with representatives of the Long Harbour fund, and asked questions of the Housing Minister seemingly off the back of your meeting:
https://www.thetimes.co.uk/article/labour-mp-kate-osamor-in-spotlight-over-meeting-q37zs09dd

Based on our previous meetings, you should be aware that Long Harbour seem to be the ultimate owners (or at least heavily involved) in matters surrounding the freehold of Prowse Court.

You should also be aware that the freehold to Prowse Court was sold out from under our feet to Long Harbour, bypassing our legal right of first refusal based on some agreement and legal loophole between Countryside Properties and Long Harbour that was never communicated to leaseholders or potential purchasers.

You are also aware that Prowse Court leaseholders suffer from onerous doubling ground rents, and that Long Harbour chose not to engage with any of the leaseholders until their hand was forced to offer a deed of variation to an RPI linked ground rent due to the bad publicity and media attention generated by Prowse Court leaseholders. To this day, our only communication with Long Harbour is by sporadic email with their agent, Homeground Management Limited, which mainly consists of demands for ground rent due.

Long Harbour have hired a PR firm to represent their interests, so I’m naturally interested to understand what you discussed with Long Harbour and what prompted this meeting?

I’m concerned your recent meeting represents an effort by Long Harbour to lobby MP’s that have constituents blighted by unfair ground rents, in an attempt to limit the damage of any future government reforms to their business model.

Your meeting seems to have spurred some questions in parliament that concern the interests of funds such as Long Harbour, so I thought I would write to you and hear the facts directly from you about your meeting with Long Harbour, and the choice of question to the Housing Minister quoted in The Times article. I know you have previously been supportive of our fight against unfair ground rents so has anything changed?

Looking forward to your reply,

Why is the Tory party not supporting real home ownership, asks Daily Telegraph

New trustees and changes at LKP
Next Post: The Social Housing Green Paper – the government should do more, says ex-civil servant