Donate
You are here: Home / News / The Social Housing Green Paper – the government should do more, says ex-civil servant 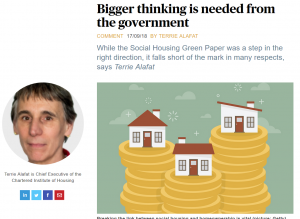 Today the Chartered Institute of Housing (CIH) Chief Executive, Terrie Alafat, told Inside Housing that she welcomed the Government’s Green Paper on Social Housing, but explained that it doesn’t go far enough.

A lack of transparency around service charges can lead to fears that leaseholders are cross-subsidising other residents. Consultation over major works can often be seen as failing to obtain meaningful input from leaseholders or to take their views on board, especially when maintenance and repairs are managed through broad framework agreements or longer term contracts. And, unlike in the private market, there is no real sanction for social landlords who do not comply with requests for information because the local authority can be both the landlord and enforcer.

A copy of the green paper can be found here and we would urge leaseholders, shared owners and social rental tenants to respond to this request for their input.

The online response form can be found here:

The most relevant section is section 3 and questions 21 to 51.

The survey can be part saved so don’t worry that you have to complete it in one go.

Turning back to the thoughts of the CIH Chief Executive:

Ms Alafat might look in the mirror first, when advising the government to do more, and ask herself why she didn’t do so when she was a civil servant and in charge?

Alafat lists herself as Director of Housing at DCLG from 2002 to 2015, when she left the civil service. The announcement of her appointment as Chief Executive of the Chartered Institute of Housing took place in December 2014.

During her role at DCLG, where she was responsible for housing issues, Director Alafat had overall responsibility for leasehold issues. By 2011 however her allocation of resources to leasehold matters had become so small that not a single civil service manager had the term “leasehold” in their job description. In addition no one in her department had any idea how big the sector actually was. It was also under Alafat’s reign that the Department was at its most vociferous in arguing that there were no major problems in the leasehold sector and that the legislation was well balanced between the landlord and the leaseholders’ interests.

During this period the DCLG funded Leasehold Advisory Service (LEASE) were at their worst. They happily provided help to landlords and developers to gain an advantage over leaseholders. Under her leadership the Department was also less than keen to do anything to encourage commonhold. Yet, like a number of other civil servants, Alafat was given a CBE – for doing her job.

LKP would suggest that CIH and the wider social sector has, for far too long, turned a blind eye to some of the inefficiencies in building maintenance costs. These costs are then passed on indirectly to their rental tenants and more directly to their shared ownership tenants and their right to buy leaseholder tenants.

One big source of problems, as highlighted in the Green Paper, is the use of Framework Building Maintenance Agreements in the social sector, also known as Qualifying Long Term Agreements (QLTA’s). In our submission to the Green Paper LKP will assert that there is often NO legitimate justification for the use of these agreements.  The sector has spent far too many years wrongly asserting they are following the “Egan Principles”, European Procurement rules, and complying with government value for money statements as a justification for the use of QLTA’s.

LKP is aware that many in the social sector will claim that it is simply a myth that leaseholders are overcharged, and that there are protections in place to stop any form of cross subsidy. The problem is that’s not how it works in practice for many sites. More than one or two social landlords are also happy to spread dissent among their three groups of tenants by allowing each to think that the other groups may get some level of subsidy. LKP would suggest all three types of tenants are being disadvantaged, not at each other’s expense, but due to the inefficiency of their social landlord.

We are not suggesting that all social landlords do things badly, but we are suggesting that the Chartered Institute of Housing and the National Housing Federation could have done a lot more a long time ago, as indeed Ms Alafat could have done, including in her previous incarnation, when she herself was a senior official in the relevant part of government.