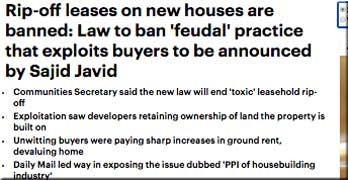 The Mail claims that the 38-year-old, who is the half brother-in-law of former prime minister David Cameron, hired London-based PR firm Pagefield through his £1.3 billion Long Harbour fund in a bid to water down the reforms.

Long Harbour director Jack Spearman also sent an email this week to property executives asking them to sign an open letter to the Government expressing their concerns about the shake-up.

A Long Harbour spokesman said: ‘Long Harbour have played a co-ordinating role over the past three months to engage with the Government constructively over leasehold reform.

“We have outlined on multiple occasions the impact on UK housing supply if all grounds were reduced to zero, and the value of an institutional freeholder.’

The Mail claims Astor’s fund has the freeholds of 160,000 homes on its books.

It is unknown whether Mr Astor in appointing Pagefield has dumped Crosby Textor, the PR / lobbying company founded by Australian PR guru Sir Lynton Crosby, the so-called “Wizard of Oz”. Crosby failed to work his magic for the Conservative Party during the last election, when it lost its parliamentary majority.

The argument that ground rents are essential to the viability of developments was always a piss-take too far.

Developers do not sell leasehold properties any cheaper than freehold ones: simply for the highest conceivable figure possible.

The new housing market has been driven by taxpayers pouring billions into the Help To Buy market.

The result? Outrageous remuneration packages for top executives such as Jeffrey Fairburn, CEO of Persimmon, getting more than £100 million in bonuses: a deal so disgraceful that the Persimmon chairman has resigned.

The leasehold scandal has been the first real push-back to the arrogance of the nation’s cheating, complacent and over-paid housebuilders.

This is a sector that needs a good deal more scrutiny.

We congratulate Sajid Javid and Gavin Barwell for refusing to be swayed by their dodgy lobbying.