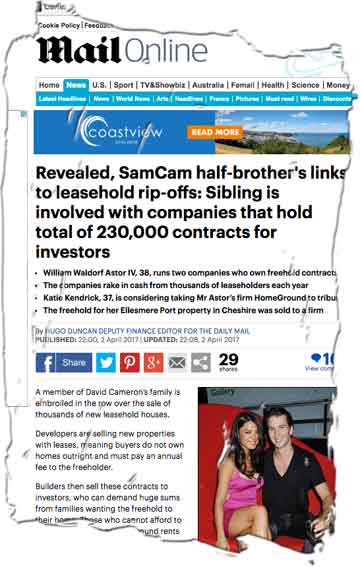 With references to large houses in Oxfordshire, and a 19,000 acre shooting estate in Scotland, the Daily Mail published a characteristically no-shades-of-grey profile of ground rent investor Will Astor today.

That’s leaving aside his half-sister being Samantha Cameron.

“Complaints about leaseholds have been simmering for several years but are now threatening to boil over and embarrass the boyish-looking aristocrat,” says the Mail.

“The alleged victims are modest families who have struggled to get a foot on the property ladder, only to find they do not really own their homes, because the freehold has passed into the hands of rich, faceless investors.”

William Waldorf Astor IV, 38, runs two companies who own freehold contracts He is married to former model Lohralee and lives in a £3.3 million town house His company rakes in cash from thousands of leaseholders each year Katie Kendrick may take Mr Astor’s company HomeGround to a tribunal She cannot afford the leasehold on her Cheshire home after it was sold off Frankly, it’s a safe bet that the Honourable William Waldorf Astor IV and his wife Lohralee, a toothsome former model, are untroubled by the property worries that keep most thirtysomething parents awake at night.

The article, by City feature writer Ruth Sunderland, contrasted the life of Will Astor and his model wife Lohralee Stutz with that of leasehold campaigner Katie Kendrick.

Mrs Kendrick, a nurse, is one of founders of the National Leasehold Campaign Facebook group. Last month it organised a demonstration outside a 2,000 leasehold houses development being built by Redrow.

Sebastian O’Kelly, of LKP, is quoted in the article saying that leasehold is “a murky business; it is the housebuilding industry’s dirty secret”.

The article points out that Astor is the CEO of investment fund Long Harbour, which has bought around 160,000 freeholds for investors, and has £1.2 billion of assets (not all are related to residential freeholds.

Mr Astor is also a director of HomeGround, which manages the freeholds earning nearly £3 million of revenues and more than £330,000 profit in 2015. 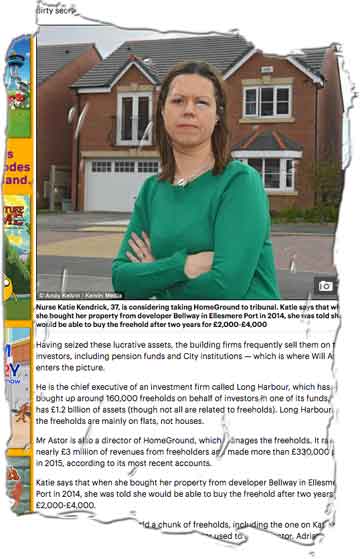 Mrs Kendrick bought her £214,000 leasehold four-bedroom house in Ellesmere Port in 2014 from Bellway.

She was told she could buy her freehold for £2,000 to £4,000, but then the freehold was sold on to murky investment company Adriatic Land, which hides its ultimate ownership behind nominee directors. The Daily Mail claimed that Mr Astor used to be a director.

HomeGround demanded £13,350 for the freehold to her home when Mrs Kendrick asked to buy it. The price has since come down to £7,680, but Mrs Kendrick is purchase via the statutory route where the price will be established by the property tribunal.

“It is rather distasteful that a monied member of the Astor family is preying on modest home-buyers. It is just a version of what aristocrats did hundreds of years ago, trying to make themselves rich through land grabs.”

The article describes Mr Astor as the second biggest operator in the freehold investment management game.

“He cut his teeth working for six years for yacht-loving playboy Vincent Tchenguiz, whose Consensus Business Group is thought to be the largest operator, with a portfolio of 300,000 residential freeholds worth around £4 billion.”

LKP would point out that this picture is far from clear, with Tchenguiz deeply indebted.

Mrs Kendrick says she is looking to the future with trepidation.

“It’s very stressful,” she says. “I don’t want my home to be someone else’s cashpoint for the rest of my life.”

Sir Peter Bottomley told the newspaper that investors should be forced to offer leaseholders the right to buy the freehold to their home at the price the investor paid, plus inflation.

“At the moment they can ask any price they like. Leaseholders can go to a tribunal but that costs thousands of pounds. The gravy train needs to stop.”

Labour MP Justin Madders told the Daily Mail: “For people like him [Mr Astor] it is just business, but it’s about people’s real lives and emotions, not just money.”

Is this LEASE being ‘unapologetically on the side of leaseholders’, Mr Barwell?
Next Post: Leasehold houses to be outlawed, says the Daily Mail