Donate
You are here: Home / Latest News / Leasehold houses to be outlawed, says the Daily Mail 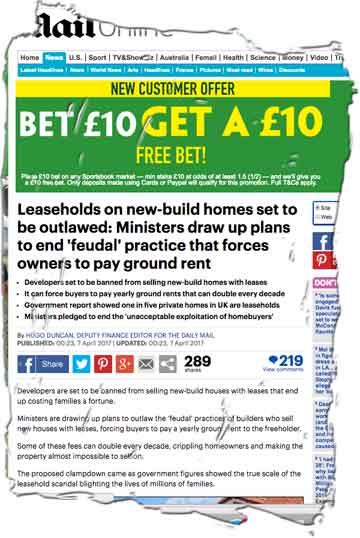 Developers are going to be banned from selling houses leasehold on land they own, according to the Daily Mail yesterday.

It reported: Government sources said officials are looking at ending the use of leasehold for new developments of houses as well as setting a minimum lease length for new flats, ‘offering leaseholders greater security and saving them money over the long term’.

Communities Secretary Sajid Javid has already announced plans to clamp down on the sale of leasehold homes under the Government’s Help to Buy mortgage scheme.

More than 10,000 new leasehold houses have been sold through Help To Buy since it was launched four years ago.

It included nearly 5,000 last year alone, or one in seven of the houses in the taxpayer-funded project.

A report by the Department for Communities and Local Government (DCLG) said that one in five private homes in England – four million in total – are leasehold.

While 2.8million of these are flats, which have traditionally been leasehold, there are now 1.2million houses that have leases, including 167,000 detached homes.

A DCLG spokesman last night said a consultation on ending leaseholds for new houses has been launched.

“We will announce more details shortly,” he said.

“It’s unacceptable that homebuyers are being exploited with unfair charges and unfavourable ground rent agreements. We will take action to tackle all unfair and unreasonable abuses of leasehold.”

The newspaper quoted Paula Higgins, of the HomeOwners Alliance campaign group, saying: ‘Leasehold is a ticking time bomb and millions of householders are in a precarious position.

‘The leasehold system too often turns the dream of homeownership into a nightmare.’