Donate
You are here: Home / News / Bellway / Leasehold ‘a lucrative way to stop people from buying their own home outright’ – Daily Mail 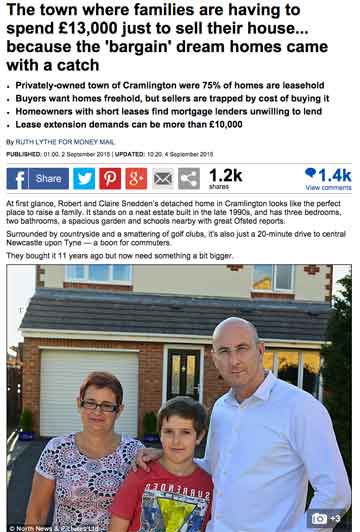 Questions must now be asked of housebuilders playing the leasehold game by building leasehold houses wherever possible in preference to freehold.

Some of the country’s biggest housebuilders – such as Persimmon and Bellway – are involved in the racket.

Politicians supposedly concerned with issues of leasehold should be questioning this matter.

Indeed, Persimmon should be under further scrutiny for holding its freeholds in offshore companies – the easier to flog off to anonymous entities and avoid the leaseholders’ right of first refusal.

£13,000 fees are required to extend the leases from the freeholders, Bellway and Persimmon.

It would be the property industry’s dream to have every new home in the country built as leasehold.

And let’s not forget retirement housebuilders such as McCarthy and Stone with their 125-year leases … which they know pensioners do not extend and therefore boost the freehold’s value.

Personal finance commentator Sam Dunn writes that leasehold is ‘a lucrative way to stop people from buying their own home outright’.

“Over the past few years, campaign groups have sprung up to try to fight for better rights for leaseholders.
They include Leasehold Knowledge Partnership, the Campaign Against Retirement Leasehold Exploitation and – more radically – the Campaign for the Abolition of Residential Leasehold.

“But our postbag continues to overflow with letters from leaseholders telling of terrible struggles with indifferent landlords. Incredibly, many new homes today are still being built in this way.

“In May, we revealed how thousands of houses – many of which are being targeted at first-time buyers – are being sold as leasehold by property firms. “And the numbers are rising, too.

“Investment companies are driving huge demand for these types of homes as they have seen it as a way to make a profit from the annual rents the buyers are made to pay. With so much at stake, I’d argue it’s time for a major review of leaseholds and their long-term impact on households …

“Given the heady mix of property ownership, house prices and matters of wealth involved, perhaps the Government would like to take up the cudgels.”