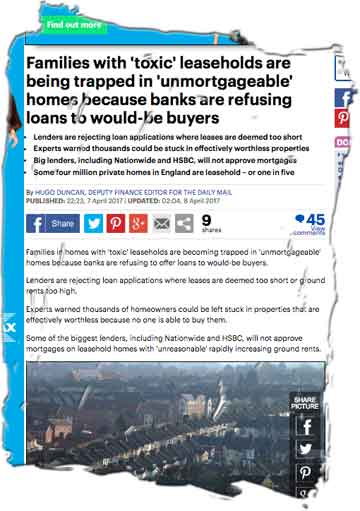 This week LKP was contacted by two buyers who had had their mortgages refused, even though the terms are not that onerous.

One was in London, where the ground rent does not in fact double but started at £150pa increases at another £150pa in 2034 and another £150pa every subsequent 30 years. The lease term was 999 years.

The second was in Windsor, where a £330,000 flat has £200pa gound rents doubling every ten years on five occasions. Lease term is also 999 years.

LKP is aware of both Nationwide and the HSBC refusing loans, which was reported by the Daily Mail yesterday. The newspaper also referenced the Lloyds Banking Group, which owns Halifax and Bank of Scotland, saying “escalating ground rent clauses can be problematic” for mortgage applicants.

LKP contacted CEO of the Council of Mortgage Lenders for a statement.

“It looks like developers in their greed to load ground rents have now set off a full-scale housing crisis.

“If mortgage companies won’t lend on leases with ground rent terms such as these … thousands of properties are effectively blighted.

“What a triumph for our venal, greedy residential property sector.”

David Hollingworth, of London and Country Mortgages, Britain’s biggest mortgage broker, is quoted: “It’s crucial that buyers understand the lease conditions and particularly those clauses that could later be viewed as toxic.

“Clauses that see ground rent double every ten years are posing a significant threat … there is a real risk prospective buyers will be put off by the escalating cost … lenders or their valuer may deem the property unmortgageable.

“Anything that affects the ability to market and sell a property to as broad a market as possible will ring alarm bells for lenders.”

“It is telling that it is now the banks, not government, who are protecting home-buyers from being abused by the leasehold system.”

“This is a concern for lenders as it could affect both mortgage affordability and future prospects for selling the property … reports of an increasing number of leasehold houses are another concern.”

Leasehold houses to be outlawed, says the Daily Mail
Next Post: Conveyancing Association’s Beth Rudolf attacks the HomeOwners Alliance for ‘scaremongering’ over leasehold