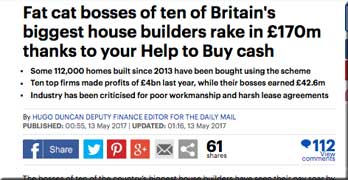 The bosses of ten of the country’s biggest house builders have seen their pay soar by nearly £170million since the launch of the taxpayer-backed Help to Buy scheme four years ago, says the Daily Mail.

Almost a third of the 405,000 homes built since 2013 – 112,000 – have been bought by families using the “controversial scheme, making it highly lucrative for fat cat developers”.

Ten top firms, including Barratt, Redrow and Taylor Wimpey, made profits of £4billion last year, while their bosses earned £42.6million. That took their total pay since 2013 to £168million.

A government survey last year found that 57 per cent of those using the Help To Buy scheme could have afforded to buy without it.

Duncan Scott, of the campaign group Priced Out, was quoted saying: ‘Th Help To Buy scheme … [makes] it even more difficult for first-time buyers to get on the housing ladder.

“Developers have been making huge profits in the last four years, building houses they would have built regardless. The Government should be helping builders build more homes, not sell the homes they are building anyway.”

Vans are banned in Persimmon leases, so here is one outside your sales suite!
Next Post: Guardian reports leasehold is the biggest problem for ‘homeowners’