Donate
You are here: Home / Latest News / Guardian reports leasehold is the biggest problem for ‘homeowners’ 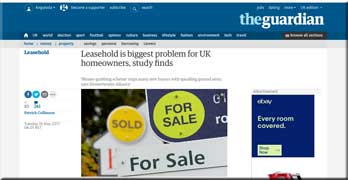 Patrick Collinson, the personal finance editor of the Guardian – the first national media journalist to address the doubling ground rent scandal – is back in the fray today.

He reports the HomeOwners’ Alliance annual survey finding that 50 per cent of adults see leasehold as a serious problem, up from 42 per cent last year.

“The Guardian, in partnership with campaign group Leasehold Knowledge Partnership, revealed last year how developers such as Taylor Wimpey had introduced clauses into 999-year leases on new-build houses that resulted in ground rents doubling every 10 years. Some buyers have found their homes unsaleable after mortgage companies refused to lend against properties with onerous ground rent clauses.”

Congratulations to Paula Higgins of the HomeOwners’ Alliance for getting another airing on this issue.

Our favourite survey on leasehold was that organised by Roger Southam, the controversial chairman of the Leasehold Advisory Service, in June last year.

Mr Southam commissioned the sector-friendly Nottingham solicitors Brady’s to carry out the research on behalf of the quango.

As both Mr Southam and Brady’s have advertised their services to “maximise ground rents” for commercial freehold owners, LKP advised leaseholders to have nothing to do with the survey.

We saw it as an attempt to obtain information about self-governing apartment blocks controlled by resident management companies or right to companies, which would not be put to good purpose.

Nonetheless, 57 per cent of the 1,244 leaseholder respondents regretted their decision to buy a leasehold property.

For Mr Southam, it was a spectacular own goal.

Even DCLG civil servants could not ignore the fact that a LEASE survey came back with such a dismal finding among flat owners.

Before the survey took place, Mr Southam was ejected from ownership of the management companies embedded in the leases at Taylor Wimpey London sites.

This meant that Mr Southam’s company Chainbow, since sold to Savills, would have controlled the management of those sites in perpetuity.

Both Taylor Wimpey London and Mr Southam had told the leaseholders that they had no role in the companies.

Taylor Wimpey then intervened to ensure that the leaseholders were shareholders of the companies. Mr Southam’s ownership of a tripartite lease, a notorious arrangement in the sector, was mysterious ended.

Mysteriously, because at this point Taylor Wimpey London had sold freeholds on to the Adriatic Land anonymous investors and had no legal responsibility for the sites.

LKP has called on Mr Southam to resign as chairman of the Leasehold Advisory Service, which is paid for by taxpayers.

The role of the service in failing to point out issues in the sector was raised by BBCR4’s You and Yours programme last month.