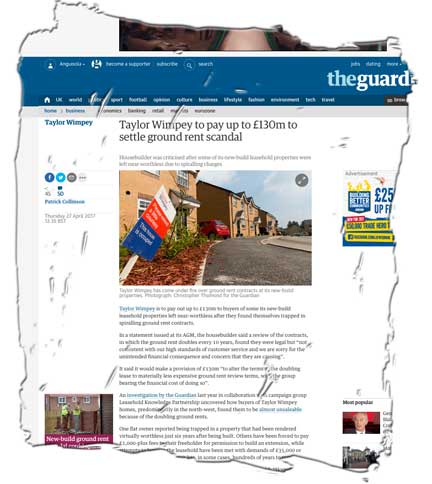 The Guardian earlier this afternoon reported the £130 million offer by Taylor Wimpey to draw a line under the ground rent scandal.

The article reports the housebuilder telling its AGM that ground rent that double every 10 years were legal but “not consistent with our high standards of customer service and we are sorry for the unintended financial consequence and concern that they are causing”.

The article is written by Patrick Collinson, personal finance editor of the newspaper, who ran a series of articles on the scandal last November and December.

Mr Collinson also spoke at the All Party Parliamentary Group on leasehold reform on December 14 last year, of which the Leasehold Knowledge Partnership is the secretariat.

Mr Collinson generously acknowledged that his series of investigations were in collaboration with LKP.

We would like to thank him wholeheartedly for sticking with this story and seeing it through to its conclusion.

Mr Collinson was also the only national newspaper who would take up LKP’s investigations into leasehold gameplayer Martin Paine, whose deeds of variation cleverness land homebuyers with ground rents of up to £8,000 a year.

The Guardian reports that Taylor Wimpey reported profits of £733m in the year to December, up 22% on the year.

Pete Redfern tells LKP how Taylor Wimpey will sort the ground rent scandal
Next Post: All Party Parliamentary Group: this is how to reform leasehold