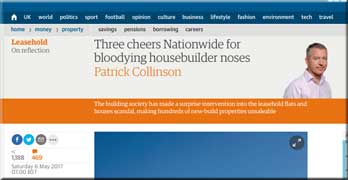 The Guardian’s personal finance editor Patrick Collinson has given a warm endorsement of the Nationwide’s decision last week to end the ground rent scandal.

“Overnight, Nationwide building society has made hundreds, and possibly thousands, of new-build flats and houses almost unsaleable – and they should be roundly applauded for doing so.”

Prices for the remaining leasehold flats start at £249,950, but ground rents are reportedly £350 and would increase with RPI.

“That’s more than 0.1% of the value of the property – which means buyers won’t now qualify for a Nationwide mortgage. Either Berkeley cuts the ground rent or finds that buyers will melt away, unable to find a loan.

“Coming so soon after Taylor Wimpey said it had set aside £130m to compensate buyers caught in the ground rent trap, it’s another small victory in the battle against leasehold abuse.”

The Leasehold Knowledge Partnership acknowledges the huge contribution of Patrick Collinson to get these scandals out into the public domain.

Last autumn he was the first journalist to write up the Martin Paine ground rent game playing – a small fry freeholder who lands ordinary families with ground rents of £8,000 a year through cleverness with a deed of variation to the lease.

Sir Peter Bottomley, who works closely with LKP in exposing these scandals, called Mr Paine a “crook” in the Commons on December 20.

Martin Paine ‘is a crook who is turning sleaze in leases into an art form’, MPs told

Mr Collinson then followed with a series of articles about leasehold flats and houses sold with doubling ground rents.

These articles on the Guardian website received more than 1,000 comments.

Mr Collinson kept going with the issue throughout November and December, speaking at the LKP organised All Party Parliamentary Group on leasehold reform on December 14.

All leaseholders should be grateful to Patrick Collinson.

We should also be thankful that proper journalism such as The Guardian still does exist and we should contribute to it.

Other coverage of Nationwide’s decision:

Patrick Collinson, of The Guardian, … on leasehold