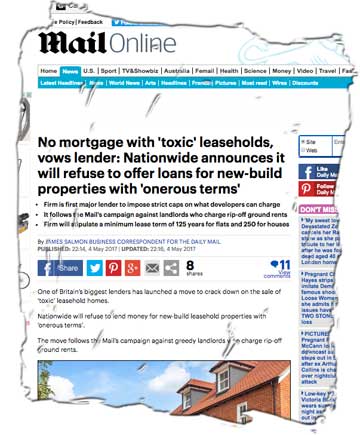 Sir Peter Bottomley today told the Daily Mail that police may need to be involved in the ground rent scandal that involves the country’s largest developers.

“Housebuilders should pay attention. This scandal needs dealing with by government and parliament,’ said Sir Peter. “Some of the worst practices should be investigated to see whether a crime has been committed.”

Sir Peter’s comments came in a report on Nationwide refusing further mortgages on properties with onerous ground rent terms. The full article can be read here

Described as a “crackdown on sales of toxic leasehold homes”, the article also quotes Sajif Javid, the DCLG Secretary of State, calling the practices “practically feudal”.

Nationwide has declared that the “maximum acceptable” ground rent for a property on which it will issue a loan in 0.1 per cent of the value.

Mortgages on homes with ground rents that double every five, ten or 15 years will be refused.

This is a hugely important statement, which is reverberating through the housebuilding sector.

Used to being applauded by politicians for producing remarkably few new homes every year, housebuilders are reeling from the public opprobrium caused by the ground rent scandal.

It now appears that through their greed and venality they have pitched thousands of homebuyers – their own customers – into properties that they cannot sell.

Nationwide, and other lenders such as Barclay and HSBC, have refused mortgages on flats and houses with predatory lease terms.

Bizarrely, Nationwide thinks 125 years should be the minimum length of a lease on a flat and 250 years for the lease of a house.

In a statement to LKP, Nationwide could not explain why it had chosen these figures.

LKP urges all leases to be indefinite, ground rent to be set to zero as it is for no service, and for flat owners to own shares in the freehold through commonhold structures – as is absolutely routine in the rest of the world outside England and Wales.

“Leases of 125 years are still predatory and ground rents should be abolished by the Government. There is no reason for ground rent except to provide an extra income for landlords at the expense of homeowners.”