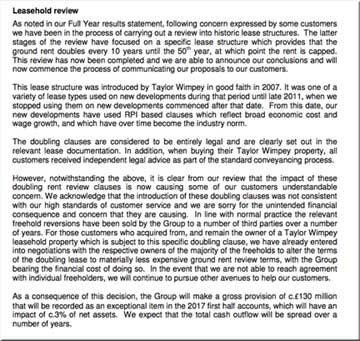 Taylor Wimpey has announced that it is putting aside £130 million to resolve the doubling ground rent scandal.

The announcement was made this morning on the eve of Taylor Wimpey’s annual general meeting in London today.

Sir Peter Bottomley and Jim Fitzpatrick MPs were contacted by Taylor Wimpey CEO last night. They have been invited to discuss the issue with Mr Redfern at 10am.

Sebastian O’Kelly, of the Leasehold Knowledge Partnership, said: “This scandal came to light owing to the efforts of LKP, a minnow organisation that is a registered charity.

“We were aware that doubling ground rents would blight these properties and make them unsellable.

“It is very likely that that generation of Taylor Wimpey management also knew that these lease terms would come back to haunt the company. Presumably after they had picked up undeserved bonuses and left.

“Homebuyers have been systematically cheated by Taylor Wimpey – and developers who imitate it with these onerous lease terms.

“Homebuyers wanted homes and trusted a plc housebuilder. Taylor Wimpey created an investment asset class – the freehold – which it then traded to anonymous and murky investors, who hide their beneficial ownership behind nominee directors.

“This ground rent racket is wealth erosion on a massive scale, which has fallen mainly on young first time buyers and their families.

“It has revealed the rotten core of leasehold as a form of property tenure.

“£130 million is not small change. It is a start in resolving this issue. But await the details.”

Sir Peter Bottomley said: ““Taylor Wimpey has recognised that leaseholders have been disadvantaged by at least £130 million.

“What is needed now is for all other developers to recognise their responsibilities.”

Sir Peter referenced the report of the All Party Parliamentary Group on leasehold reform published today.

Government and Parliament can act and have to act to reform leasehold.

Developers have to rectify the impact of their past behaviour on innocent leaseholders.

Owners of the freeholds of residential leaseholders have to end exploitation.

The All Party Parliamentary Group on leasehold reform report is published today, April 27 2017: