Donate
You are here: Home / Commons Debate 20/12/16 / Martin Paine ‘is a crook who is turning sleaze in leases into an art form’, MPs told

“We should not have to rely on the chance action of a campaigning charity such as LKP [the Leasehold Knowledge Partnership] or  the Campaign Against Retirement Leasehold Exploitation—or a passing Member of Parliament, to get things put right.”

Ironically, as a regular attender of the paid-for events held by the Leasehold Advisory Service he has fine-tuned his imaginative activities in landlord and tenant law courtesy of taxpayers.

One crook is Martin Paine — pain with an e on the end — who has taken “lease” beyond sleaze, almost by adding a letter at the beginning, and into an art form.

He owns [freeholds where there are] a number of short leases, and anyone who wants to sell them has to get an extension. My understanding is that he offers legally valid, informal extensions.

Under a formal extension, the ground rent reverts to virtually nothing.

Martin Paine’s informal leases contain a provision that doubles the ground rent every 10 years or so, but that is written into the lease in such a way that even experienced solicitors fail to find the wording or to connect the clauses together.

A person, who may be a first-time buyer of a low-value flat, may then discover that they are asked for enormously high ground rents, and they are enormously high because Martin Paine has written the provision back to the first granting of the lease, not from the time of the extension. 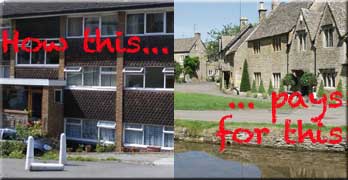 A flat might therefore be worth £150,000, but the leaseholder will be asked for thousands of pounds a year in ground rent, with the prospect of that going up.

When the leaseholder complains, Mr Paine’s practice, as I understand it, is to say, “Sue your solicitor.”

I therefore recommend that providers of indemnity insurance for solicitors get together, which I think they can do without being a cartel, and ask, “What pattern of claims have we had from those we insure?” to see whether this crookedness can be stopped.

Martin Paine will then occasionally buy back the flat at a low price and re-market it with the same terms.

To do that once could be regarded as incompetence; to do it twice on the same property is deserving of the word “crooked.”

Every single auctioneer should do what we had to recommend to one respectable auction house: look at the leases. It turned out, of course, that Martin Paine had not actually supplied the lease to the auctioneers early on—it was withdrawn.”

Benjamin Mire ‘not fit to go on being a member of RICS’
Next Post: Billionaire John Christodoulou and his lawyer David Marsden accused of ‘little short of harassment’ of court-appointed managing agent