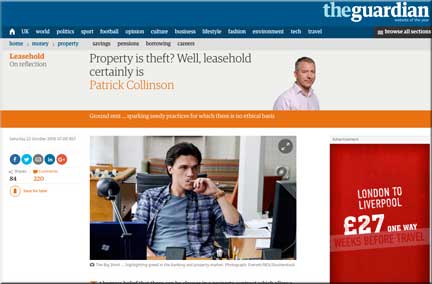 The Guardian newspaper has today reported the Blythe Court ground rent scandal that has left leaseholders with bills of up to £8,000 a year.

In 95 years the ground rents can reach £8 million a year for a one-bedroom flat bought for £58,000, says the article, written by Guardian staff reporter Rupert Jones.

It quotes leaseholder Kadian Kennelly describing the practice as “simply scandalous”, acknowledges the role of the Leasehold Knowledge Partnership in highlighting the issue and quotes MP Sir Peter Bottomley.

The article can be read here: https://www.theguardian.com/money/2016/oct/22/small-print-ground-rent-property-millions-leasehold-flat#comment-85948167 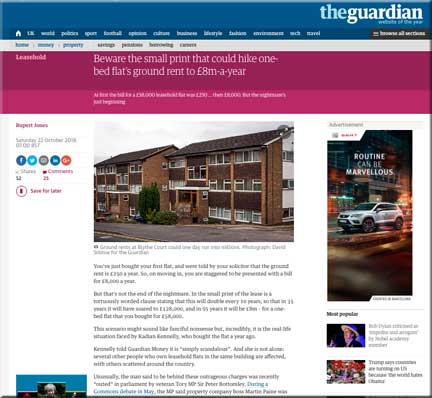 He referenced housebuilders building leasehold houses, now thought to be around 6,000 a year according to the DCLG.

The article can be read here: https://www.theguardian.com/money/blog/2016/oct/22/leasehold-property-ground-rent-no-ethical-basis#comment-85953791

“No wonder financiers love this stuff. Bundle up loads of ground rents, create a fund effectively paying 7% and you can sell it for twice the price you paid, because even a 3.5% yield is attractive these days. And all for doing absolutely nothing. Ground rent is almost the definition of a socially useless activity.”

The Leasehold Knowledge Partnership is quoted: “Freeholds represent 5% or less of the capital value of a block of flats yet have a preponderance of the power. That does not make sense, even capitalistically … a tough monetising property spiv should get a 20% annual return on a freehold.”

And LKP’s solution is also referenced:

“New leases should be indefinite; ground rent should be abolished; all flats should be built with residents’ management companies, so the residents take control once a majority of the flats are sold.”

Do you REALLY know what your managing agent is charging you?
Next Post: Right to manage champion Urban Owners joins LKP