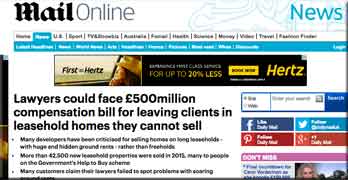 The same small number of legal firms recommended by developers when selling properties with onerous ground rent terms could face legal bills of up to £500m, says the Daily Mail.

Many buyers were lured by discounts on purchase prices and on legal fees for using the recommended solicitors.

Louie Burns, of Leasehold Solutions, was quoted saying: “I wonder whether these companies have really told their customers if they’re facing a bad deal.

“They have been handed several hundreds of thousands of pounds in fees thanks to developers.”

More than 42,500 new leasehold properties were sold in 2015 – and Mr Burns says payouts for negligence could hit £578million for that year alone.

The article quoted a survey of buyers by Leasehold Knowledge Partnership, which found that Taylor Wimpey had the worst examples of doubling ground rents.

Sebastian O’Kelly, of Leasehold Knowledge Partnership, was quoted saying: “Now some of these properties are coming on to the market as resales, and other solicitors are looking askance at these lease terms and advising buyers to pull out.”