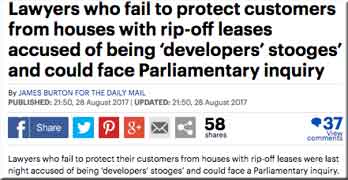 The issue of conveyancing solicitors recommended by developers failing to warn buyers of toxic lease terms was raised in the Daily Mail yesterday.

Both developers and estate agent chains have panels of solicitors they recommend to unwary buyers – Countryside Properties plc even terms them “approved” solicitors.

So far in LKP’s two surveys of thousands of leasehold buyers, caught up in the onerous ground rent scandal, not one firm has highlighted problems with the lease or advised buyers not to complete the purchase.

Lawyers who fail to protect their customers from houses with rip-off leases were last night accused of being ‘developers’ stooges’ and could face a Parliamentary inquiry. Conveyancing solicitors are meant to help buyers understand their contracts and advise them against agreeing a bad deal when buying a new home.

“These conveyancing firms are little more than developers’ stooges. The idea they act independently is laughable. We’ve got to stop developers from having panels of stooge solicitors who they recommend to house buyers.”

Andrew Selous, Conservative MP for South West Bedfordshire – who has been raising leasehold issues in the Commons since 2002 – also spoke out:

“Parliament needs to take action over in-house conveyancers for leasehold houses. These firms then disappear, leaving buyers with no ability to get redress when they have been poorly advised.”

Justin Madders, a former solicitor who is now Labour MP for Ellesmere Port and Neston, said: “I would hope for the profession’s sake that regulators will be able to go to this inquiry and say they have fully investigated what happened – rather than going to a hearing and saying they’ve not looked at it because they didn’t think there was a problem.”

Leasehold is a feudal legacy past its time
Next Post: ARMA’s self-regulation in disarray after member sues the organisation and Sally Keeble resigns