Donate
You are here: Home / Latest News / Vans are banned in Persimmon leases, so here is one outside your sales suite!

Imaginative leasehold activists have struck again: parking a van outside a Persimmon sales suite with warnings about leasehold houses.

Thinking of buying a dream house?

Before signing anything make sure it’s not … LEASEHOLD

Or it will become a PRISON!

Insist on freehold ONLY

Jamie Clark, who was seeking to buy a house on Sycamore Drive, a Persimmon site in Wakefield, was furious to discover this after he had paid a deposit.

Mr Clark uses his van to get to and from his place of work.

“I wish to request that this unreasonable restriction be revoked officially, as opposed to being told that the leaseholders are turning a blind eye to this clause at the moment, as other similar vehicles are currently parked on their owners’ drives with no apparent consequence.

“One of your sales people even stated that unless neighbours complained, the restriction was unlikely to be an issue.”

It is not known whether Mr Clark received a reply.

Sebastian O’Kelly, of LKP, wrote: “This is an excellent letter, although I am not optimistic that you will receive a reply from Persimmon’s CEO Jeffrey Fairburn as he is shy (in spite of talking sanctimonious drivel about engaging with stakeholders in the last annual report) …”

Mr Fairburn is not so shy about his remuneration package however and is in line for a payout of more than £100 million.

“This is completely obscene. Absolutely nobody is worth £100million. These bonuses will add petrol to the fire that housebuilders are taking advantage of the Government and taxpayers.

“This is obviously a company that is losing its way and is not getting the balance right between rewarding its staff and serving shareholders and society as a whole.”

Chris Leslie, a former Labour MP, said: “When even some of the most conservative City investors start baulking at these multi-million pound deals you know that they are truly excessive.

“Frankly these executives are taking the mickey and should recognise there is a housing crisis which needs responsible businesses acting as though they are part of the rest of society and not on different planet.”

While on the subject of housebuilder’s pay, Taylor Wimpey directors are selling shares, see the table below: 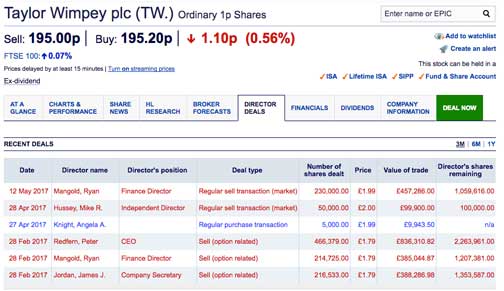