A few months ago my brother-in-law – who never did anything as unremunerative as journalism – asked my advice on building a penthouse on top of his London offices in heritage Southwark.

It’s where Bridget Jones lives in the films.

As a trustee of a charity dedicated to making leasehold fair, I suggested that he build it commonhold and sell it off to a “hard-working British family”.

Admittedly, this would cause a few issues, given the commercial property below, which needs to be rented out, and the compromise it would make to the freehold title of the building.

Nonetheless, it would all be worth it for the warm, fuzzy glow he would feel in the evening and he would be advancing the cause of commonhold, which needs to be adopted in England and Wales to prevent the endless leasehold monetising reported on this website.

On the other hand … Another course would be to flog it off in the Far East on a 125 year lease, with £850pa doubling ground rents.

Draw up the lease so it includes – as many do – that the leaseholder is “not to use the premises or permit them to be used for any illegal or immoral purpose or for any other purpose whatsoever otherwise than as private residence”.

Then kindly offer to rent out the flat on behalf of the buyer, ideally making this process as informal and opaque as possible.

Install a couple of prostitutes, wait a few months and then tip off the police.

Forfeit the property in a fit of righteous indignation, and pay off the accomplices.

Leaving aside the immorality and criminality of the above, there is a fly in the ointment. Salacious journalists rather like stories about prostitutes and penthouses, so most unwelcome attention might be paid to the case.

Meaning that the scam would be a one-off rather than a repeat business.

Of course, LKP would not suggest for a moment that such a scenario is considered by Bernie Wales, the “leasehold expert”, in one of his webinars.

Bernie Wales is giving a webinar tomorrow evening at 8pm – register here – on splitting up freehold buildings and creating leases.

You will learn “everything about splitting freehold property titles – creating leasehold and efficient leases – and selling residual freeholds for meaningful profits”.

Bernie Wales adds: “That’s going to be hard to do in just 60 minutes, but I’ll do my best!”

It will be interesting to discover whether he recommends adding the clause about “illegal or immoral purpose”.

A couple of years back Bernie attended the LKP’s Westminster roundtable on commonhold. Unaccountably, he was representing the Federation of Private Residents Association.

He describes himself as a “successful entrepreneur” in residential leasehold property management and investment.

Where the sun doesn’t shine

Bernie Wales’s video is well worth watching by leaseholders: they will at least understand the mindset of the other side.

It is bottom of the pond property asset management, but an echo of the practices of all the major house builders presented with the opportunities of leasehold.

He outlines the main income streams associated with leasehold – ground rents, insurance commissions, management charges, planning gain and reversionary value of the lease expiring – and offers consultancy to make sure that they are done efficiently.

One good point is that he emphasises that leaseholders are tenants – no estate agency nonsense here of “virtual freehold” or describing leases as home ownership. But then Bernie Wales wants to stress the impotence of leaseholders to make freehold investment attractive to his audience. This may not be nice, but it is accurate.

After developers or investors have carved up an existing freehold property into flats, Bernie is offering a service to “tweak the lease to enhance the freehold value”.

He can also find freehold buyers, or he suggests property owners can go into joint venture with him.

Obviously, homeowners caught up in leasehold disputes are going to hate all this.

And Bernie Wales skims over ground rents rather too quickly as a legitimate rent that leaseholders have to pay. There is no coherent justification for ground rents at all: developers and freeholders have charged what they think they can get away with, which is why Nationwide this month refused loans on ground rents of more than 0.1 per cent.

But the question here is the same as that facing my brother-in-law.

Flats are going to be fashioned out of existing buildings.

How do you do it, and what sort of saints are around who will deny themselves the income streams that leasehold – unique in the world – offers them in England and Wales?

The point politicians and civil servants need to grasp is that flat ownership does not need to be this complicated. Those with the greatest financial stake in a building – the flat owners – should control it.

Commonhold would bring this asset management to an end. 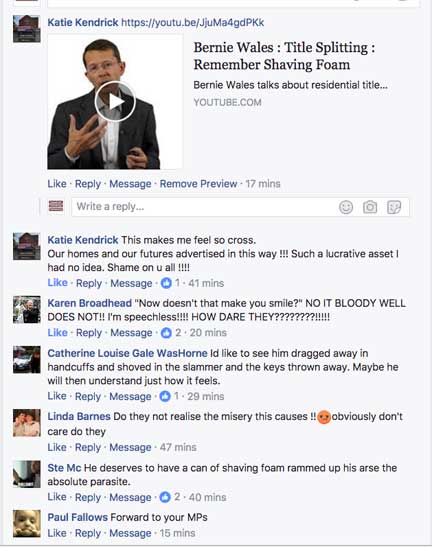 Cramlington: The wet dream of housebuilders, where everything is sold leasehold

Bannister Preston and Cohen Filippini Solicitors ‘errors’ over ground rents, says BBC
Next Post: Vans are banned in Persimmon leases, so here is one outside your sales suite!