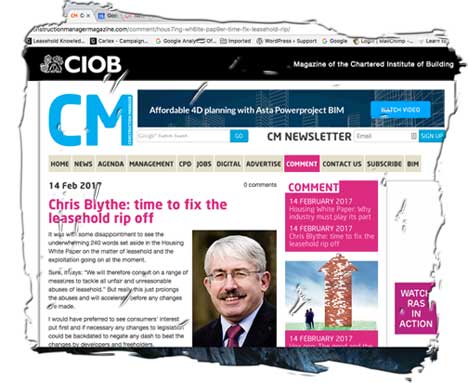 Housebuilders ripping off leaseholders is the next RPI scandal, according to the Chartered Institute of Building yesterday.

Its chief executive Chris Blythe OBE said the government’s White Paper was a disappointment, with only 240 words given to the subject of leasehold.

The full article is here and we are delighted that the Chartered Institute of Building is joining this campaign to end leasehold.

“Sure, it says: ‘We will therefore consult on a range of measures to tackle all unfair and unreasonable abuses of leasehold.’ But really this just prolongs the abuses and will accelerate before any changes are made.

“I would have preferred to see consumers’ interest put first and if necessary any changes to legislation could be backdated to negate any dash to beat the changes by developers and freeholders.”

Mr Blythe criticises the “relatively recent practice of shorter leaseholds with increases in ground rent included in the contract not properly explained or hidden”.

He added: “… freeholds get sold and passed on to speculators who either impose big ground rent increases or charge a fortune for the freehold to be bought out.

“There is no real reason for this practice other than house builders taking advantage of buyers desperate to get on the home ownership ladder.”

“Maybe it’s time to make commonhold the default arrangements for residential developments that would normally be done leasehold and ensure transparency from the start. As a further measure, current leasehold developments that were established with less than 100-year leases should be converted to commonhold at the freeholder’s expense.

“As a parent watching my son battling to get on the housing ladder it’s been a real eye opener looking through some of the leasehold agreements around – legalised extortion in some cases.”

LKP poised to mine information on leasehold, after being admitted to Open Data Institute

Leaseholder activists rejected for positions on LEASE board
Next Post: Have lenders refused mortgages on doubling ground rent properties?