The four-year campaign of the Leasehold Knowledge Partnership to reform leasehold has taken a surge forward this week.

Today Labour said that it will cap charges that leaseholders pay in ground rents, and set out a plan to end leasehold houses in new developments.

On December 14 the All Party Parliamentary Group on leasehold reform, of which LKP is the secretariat, will discuss with housebuilders concerns over ground rents and leasehold houses.

Labour wants to stamp out the doubling ground rents reported on LKP that have made some leasehold properties unsellable.

The Guardian is wholly endorsing the Leasehold Knowledge Partnership campaign to reform the sector.

It has been driven up the agenda of the party by Jim Fitzpatrick, patron of LKP.

Earlier this week LKP and Mr Fitzpatrick met Ruth Cadbury MP, who is the shadow housing minister, for a briefing on a range of leasehold issues.

Labour says it “will look at what fresh legislation will be needed to end the routine use of leasehold ownership in developments of new houses entirely, moving towards the abolition of ground rents”.

This is unfinished business for the party that introduced the Commonhold and Leasehold Reform Act in 2002 to try to deal with leaseholders being ripped off by “unscrupulous developers or managing agents”. 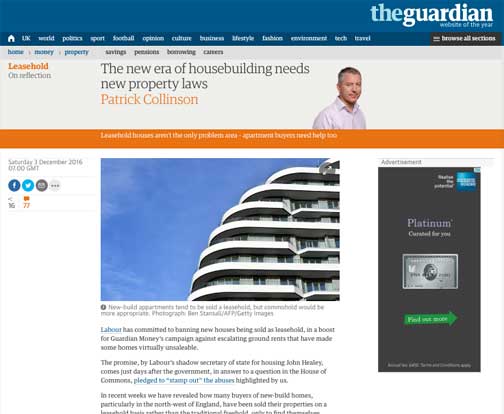 “Home-owners who own their home on a leasehold basis are currently unprotected from huge rises in rip-off ‘ground rents’ from developers or management companies.

“At its worst this is little more than legalised extortion and too many leaseholders are having to pay hefty bills as a result. Under a Labour government this sharp practice would end.

“This is unfinished business for Labour – we gave leaseholders more protection in government, but the continuing problem now means we must do more.

“A Labour government would give leaseholders security from rip-off ground rents and end the routine use of leasehold ownership in new housing developments.”

Fill in our survey to demonstrate the new-build ground rent scandal
Next Post: Taylor Wimpey CEO to meet MPs over ‘cancer’ of doubling ground rents (which were deterring astute buyers in 2007!)