Donate
You are here: Home / Latest News / The Sun attacks ‘fatcat’ housebuilders with inflated fortunes thanks to Help To Buy

A FATCAT boss involved in the leasehold scandal lives in one of his company’s newbuild homes. But he has avoided the rip-off ground rent fees that have ruined the lives of other homebuyers. Ted Ayres, chief executive of property giant Bellway, bought his smart new home on a development in Kent, in December for £400,000. 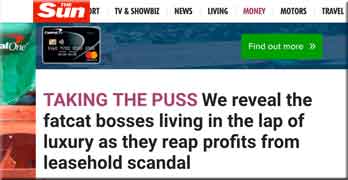 They mark a strong contrast with the 100,000 leaseholders stuck in unsellable leasehold properties with aggressively escalating ground rents.

Lenders such as Nationwide and Santander have said publicly that they are not going to lend on this toxic products. Others, such as Barclays, will not lend on leasehold houses at all.

The Sun focuses on the housebuilder bosses such as Ted Ayres, of Bellway, and Pete Redfern, of Taylor Wimpey, living in substantial houses in the Home Counties … all of them freehold.

It throws in Redrow founder Steve Morgan and Jeff Fairburn, CEO of Persimmon, who appears to be in line for a Help To Buy driven bonus of c£100 million by 2021.

Herded up among the “fatcats” are William Waldorf Astor, the viscountcy and half-brother of Samantha Cameron.

For six years, he worked for controversial financier Vincent Tchenguiz, who was arrested by the Serious Fraud Office on wrong evidence in March 2011.

By gearing up his residential freehold portfolio, Vincent became one of the most formidable tycoons in the country and was poised to take over Sainsbury’s before the crash.

Another freehold fund founder mentioned in the article is James Tuttiett, of E&J Capital Partners, based in Winchester.

Sebastian O’Kelly, a joint trustee of LKP with Martin Boyd, is quoted saying:

“Fat cats? These bosses are morbidly obese moggies who have swallowed a cash sofa. Enough.

“Builders have been cheating ordinary people trying to buy homes — and the rest of us, as the taxpayer-funded Help To Buy scheme has fuelled these sales.

“Instead of paying themselves outrageous bonuses, they need to put right this injustice and help those whose homes are unsellable.”

Cramlington: The wet dream of housebuilders, where everything is sold leasehold

Should you buy a leasehold house now? Certainly not!
Next Post: Will Sanity Return To The Housing Market? »