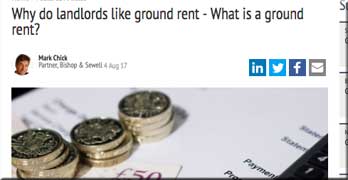 Here is landlord and tenant solicitor Mark Chick, of Bishops & Sewell, explaining that ground rents are a really dull investment and who would have thought they would make the front page of The Times.

More from Mr Chick in News on the Block here (well, it isn’t Investors’ Chronicle):

Next up comes Cassandra Zanelli, now with PM Legal Services, on Nationwide declining to lend on onerous lease terms.

She rightly points out that the public statement refers only to new build property.

In fact, mortgage lenders are markedly nervy over leasehold properties at present, and declining loans at the merest suggestion of games being played with lease terms and ground rents.

LKP is informed – by aggrieved buyers and sellers – of deals falling owing to mortgage lenders concerns virtually every day.

LKP is always interested in hearing more from Cassandra Zanelli.

“I emphasise that our clients position is entirely reserved in respect of further action they may take relating to defamation, together with damages and costs, should you proceed to publish the article.

A case of no Paine, no gain, eh Cassandra?

QUESTION I have an RPI Lease which has an annual ground rent more than 0.1% of the capital value which is now not approved of by Nationwide. Is this likely to cause me a problem in the future? ANSWER

And here is Phil Parkinson, legal director of JB Leitch debt collectors, offering some quite sensible advice on why leaseholders have to do what they are told by their landlord.

It is noteworthy in being one of the few emissions from JB Leitch that does not use the F-word. That is, F for forfeiture.

Sector foxes warn that changing leasehold will be ‘dangerous’. But for whom?

Even if you only respond to one question, take part in the Law Commission consultation!

The Sun attacks ‘fatcat’ housebuilders with inflated fortunes thanks to Help To Buy
Next Post: Countryside Properties plc cracks over ground rents scandal …