First-time buyers are contacting LKP after finding that they cannot sell leasehold houses or flats which have draconian ground rents introduced by plc housebuilders.

An epidemic of leasehold houses is now being built across the country, with a heavy concentration in poorer regions, such as the North West.

LKP reported earlier this week that £1.9 billion of leasehold houses were built last year, according to the Land Registry.

So far this year, the figure is £775 million, but this can be a misleading figure as properties can take six months to be registered. 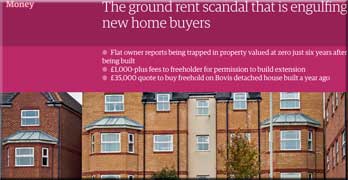 Today the Guardian Money for the fourth week continues its campaign over leasehold scandals, which was initiated by case studies and data provided by the Leasehold Knowledge Partnership.

This has included the ground rent scandal surrounding Blythe Court and last week the newspaper looked at the devastating ground rent escalations in leases by plc housebuilders such as Taylor Wimpey.

It is obvious to LKP that not only is there an epidemic of leasehold houses being built, which should have ordinary freehold tenure, but that they often come with devastating ground rent increments.

Both The Guardian and LKP have been deluged with owners of new build houses and flats where the ground rent doubles every ten years making them very difficult, if not impossible, to sell.

The fact that plc housebuilders have stuffed their own customers in this fashion is absolutely astonishing.

Two Taylor Wimpey customers have got in touch with LKP to claim that their properties cannot be resold because of the onerous ground rent terms.

In one case a solicitor has taken the usual step of writing to Taylor Wimpey saying that two purchasers have pulled out owing to the ground rent doubling every 10 years.

Clair Scott, whose leasehold house is in on estate of 50 at Taylor Wimpey’s Silver Birch Close in Lostock, Bolton, claimed her buyers pulled out in September because of the ground rent terms.

“Our buyers had ordered furniture, booked in decorators, the works. They signed all the contracts and a few days before completion their solicitor read the lease properly and spotted our ground rent clause: £295 per year, doubling every 10 years until the 50th anniversary.

“The solicitors advised our buyers not to touch the house as it was unsalable in the future, given that by 2060 ground rent on this £200,000 mid-terrace three-bedroom house would be £9,440 per year!

“The house sale fell through as you can imagine and all parties involved are devastated after losing a lot of time and money.”

Mrs Scott claims that half the houses at Silver Birch Close have these onerous ground rent terms, while those bought after January 2012 have leases where the ground rent increases linked to RPI.

Mrs Scott also claims that many on the estate, including her, were not offered the right to buy the freehold.

These were sold to UK Ground Rent Estates Limited, where the ground rents are managed by Forte Freehold.

“We have no idea what we can do,” said Mrs Scott. “We are trapped by this God awful house with a lease that we can’t sell.

“We are first-time buyers, as are lots of others.

“We used Taylor Wimpey’s recommended solicitors and the key messages were: we can’t paint our door for two years and we can’t have livestock on the land.

“All daft stuff. Not: ‘By the way this is a hellish lease that will potentially cause you a lot of financial trouble and inability to sell in the future’.

“As a 25 year old first time buyer I did not have had a clue whether this was normal or not.

“Besides Taylor Wimpey is a massive plc company, surely? How can this be right?”

The cost of an extension at Silver Birch Close 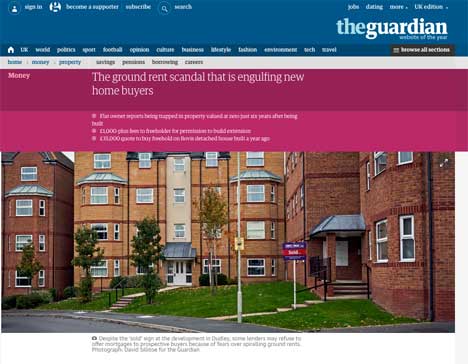 The second Taylor Wimpey customer is the wife of Sean Greenwood, who sent a letter to all the MP members of the All Party Parliamentary Group on leasehold including its chairman and LKP patron, Sir Peter Bottomley. LKP is the secretariat of the APPG.

“We are suffering from something that is close to your heart: a greedy freeholder with a punitive lease that prevents us from selling our apartment,”

Mr Greenwood estimates that over the life of the lease the freeholder raise £21,672,000 in ground rent from the 32 apartments.

There will, of course, be other income streams: management, insurance commissions, lease extensions, subletting and building consents etc.

This is a spectacular income from a freehold that Mr Greenwood believes was bought for £138,000. He also claims that the freehold was never offered to the leaseholders.

“Our apartment is only six years old and built by what we thought was a reputable national house builder Taylor Wimpey,” says Mr Greenwood. “How can it be worth nothing?

“And how can freeholders be allowed to fleece residents who are essentially held to ransom, not able to sell, so forced to live there forever and pay the spiralling ground rent charges?”

He claims that sales at the 32-unit site have fallen through as mortgage companies refuse to lend on properties with such high ground rents.

In September solicitor Donna Croot, of Talbots Law, was instructed by another owner to inform Taylor Wimpey that two buyers had pulled out of purchasing the flat because of the “excessive rent review clauses in the lease”.

In both cases, the aggrieved owners claim they used the solicitors recommended by Taylor Wimpey to purchase their homes.

Mr Greenwood told MPs: “My wife was duped into buying the apartment then sold down the river by Taylor Wimpey to the greedy freeholders who simply see the residents as a cash machines.”

LKP is still waiting for a response from Taylor Wimpey on these cases, which were also reported in the Guardian.

A statement from Taylor Wimpey to the newspaper reads: “We can’t comment on this particular situation as we do not know the details of how the valuation was arrived at. However, it should be noted that Taylor Wimpey does not own the freehold for this development.”

Leaseholders at other sites have contacted the Guardian.

Last year Martin Mellors and his wife bought a newly built detached house in Botley, on an estate on the edge of Oxford with flats and houses built by Bovis Homes.

The Mellors knew it was a leasehold house but were reassured by the long lease.

“We weren’t told until we were putting a deposit down that the property was leasehold.

“We almost pulled out but were offered assurances (to the effect that the lease is 999 years, the development will be managed by Bovis so they have a long -term interest in quality and ensuring ‘good behaviour’, and that all properties were being sold this way and it couldn’t be changed.”

A few months later Bovis sold the freehold to Gateway Property Management, one of several ground rent companies based in Southend ,“thus negating some of the assurances we were given at sale”.

The ground rent is £250 a year, rising with RPI, and more expensive houses on the estate were in fact sold freehold.

Bovis told the newspaper: “Out of respect for customer confidentiality we cannot comment on individual purchases, but as a business it is our standard practice to sell our new houses on a freehold basis.

“In those extremely rare instances where this is not the case, this could be down to a number of local factors, such as building on a consortium site where conditions have been put in place as part of the land purchase. Throughout any house purchase customers will be kept fully informed of the sales process and structure, by our own teams and should also be advised and updated by their own solicitors.”

Gateway, based in Southend, Essex, runs GroundRents.co.uk. According to the website, “we act as strategic partners to property developers” by “releasing the value in their ground rents” with “leases that maximise their worth”. However, it adds that “we also take care of the leaseholders’ interests after sales”.

Other cases are referenced in the Guardian.

One reader says she purchased a Persimmon new-build in December 2015. She claims: “The word ‘leasehold’ was not used until very, very late in the process, which was fast-tracked due to delays in building and my move-in date.

“I studied law at university and am interested in contracts, so I was shocked to finally be told that it was leasehold when I was already emotionally invested in the property and had booked my moving-in van!”

Persimmon is quoted saying: Persimmon said: “The type of property, freehold or leasehold, is discussed clearly with each customer prior to purchase and is described on every reservation form. Customers are under no obligation to use a solicitor known to Persimmon. We recommend solicitors who have knowledge and experience of a particular development. This improves speed of service for the customer, and can sometimes reduce costs.”