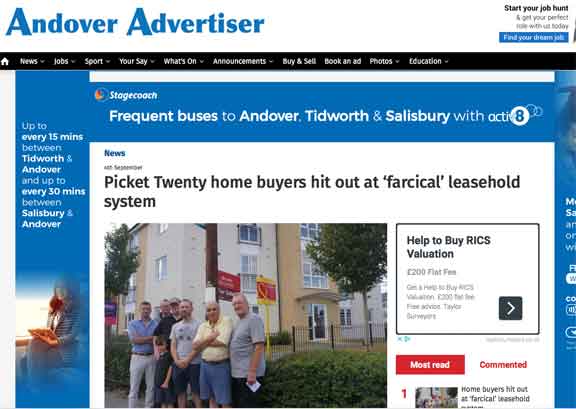 The housing minister Kit Malthouse has a Persimmon ground rent scam at the Picket Twenty site in his own North West Hampshire constituency.

It brings home the misery of many urban leaseholders right on his doorstep in the leafy shires.

The Andover Advertiser newspaper reports leaseholder, Kevin Brown, who purchased his lease in 2014 and, since a break up with his long-term partner, has been trying to sell the property on.

The father-of-one said: “During the period it was on the market I had little interest from any buyers and learnt from a neighbour, also trying to sell a similar property, that they had two sales fall through because the purchasers were unable to obtain a mortgage due to the ground rent and uncapped service changes payable.

“I feel stupid and naïve, but at the time I was sold a dream for a new start for my family, owning our own home.”

Mr Malthouse is quoted in the local paper saying:

“I am currently in the process of organising a meeting between Persimmon and my affected constituents to uncover what happened during the sales.

“It’s unacceptable for home buyers to be exploited through unnecessary leaseholds. That’s why we have announced new measures to ban leaseholds for almost all new build houses, and changes to ensure ground rents on new long leases are set to a peppercorn rate.”

Persimmon was the most aggressive developer in spreading leasehold houses across the country.

Many were bought with the taxpayer-funded Help To Buy, and chief executive Jeffrey Fairburn filled his boots with such a greedy pay settlement that it would have led to a £115 million bonus.

He has accepted £75 million, and uses the rest in a charity.

The people are truly fed up with these rip-off practices from plc housebuilders and government should hang its head in shame for allowing its Help To Buy scheme to be so abused.

It is time for the Jeff Fairburns of property to be told that their appalling practices revolt public opinion.