Donate
You are here: Home / News / Cladding scandal / Taylor Wimpey has paid out only £11.2m of the supposed £130m to sort the doubling ground rent scam 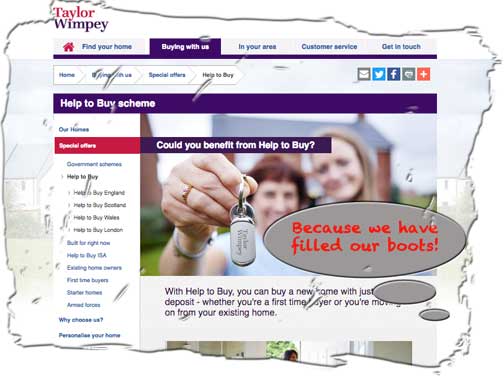 Taylor Wimpey has paid out only £11.2 million of the £130 million it set aside to address the doubling ground rent scam it inflicted on its customers between 2007 and 2011.

During that period, the plc housebuilder dreamed up highly aggressive ground rent terms and thought the wheeze so brilliant it spread them to leasehold houses.

Meanwhile, it is also paying out to remove combustible Grenfell cladding – aluminium composite material – and has set aside £30 million to pay for this.

The only Taylor Wimpey site that we are aware of with Grenfell cladding is Glasgow Harbour, in Scotland where flats are not sold as leasehold tenancies and as a consequence freehold owners are not running off to the courts to establish that leaseholders are liable for the bill to remove the cladding.

For reputational reasons – and to reassure government that they are not completely irresponsible – plc housebuilders have stepped in to pay for the removal of the Grenfell cladding: Barratt did so at Citiscape, in Croydon, which it built as long ago as 2005; Taylor Wimpey at Glasgow Harbour and other sites; and the plc housebuilders’ usually tame warranty provider NHBC at Galliard’s 1,000 flat New Capital Quay, in Greenwich.

Meanwhile, it is an open question whether other developers pay up to meet the hills, as government hopes.

Australian firm Lendlease is showing no sign of doing so at its Manchester sites, Cypress Place and Vallea Court, which were taken to the tribunal last month by freehold speculator Pemberstone to establish that owners of leasehold tenancies are liable for the errors of others.

The tribunal found the leaseholders liable to pay for the cost of replacement cladding under the terms of their leases. It also found leaseholders liable to cover the costs of the ‘Waking Watch’ at Vallea Court, and it declined to make a section 20C order (a s20C order prevents that landlord from recovering the costs of going to the Tribunal through the service charge).

For example, it claims that it has set aside £130 million “following concerns raised by certain customers in the latter part of 2016 relating to the mortgageability and saleability of their homes due to the ground rents structure in their leases”.

That should read: following a nationwide scandal taken up by all media which has prompted the government to promise to ban leasehold houses and set new ground rents to as low as zero.

“The doubling clauses are considered to be entirely legal and are clearly set out in the relevant lease documentation. In addition, when buying their Taylor Wimpey property, all customers received independent legal advice as part of the standard conveyancing process. In line with general industry practice the relevant freehold reversions have been sold to a number of third parties over several years.”

A different view of Taylor Wimpey’s practices is offered by former customer – and victim of the doubling ground rent scam – Joanne Darbyshire, one of the founders of the National Leasehold Campaign Facebook group along with Katie Kendrick and Cath Williams. 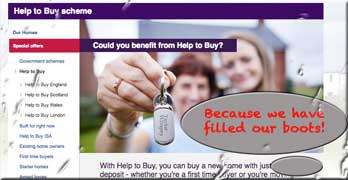