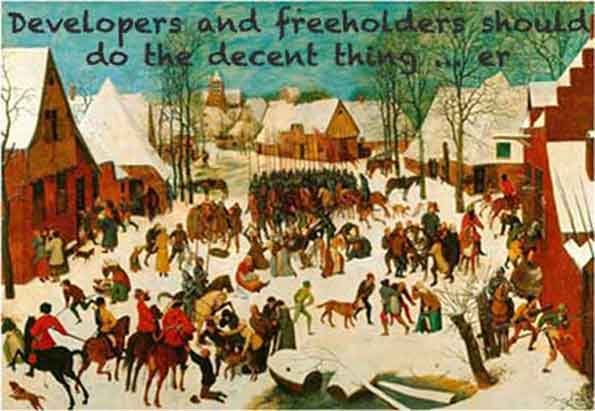 The property tribunal last week dumped the cost of removing Grenfell cladding on the residents at Cypress Place and Vallea Court in Manchester’s Green Quarter, which were built by Australian builder Lendlease.

And Vallea Court pays for the “waking watch” fire marshals.

In addition, the tribunal declined to issue a section 20c order, which means that ground rent speculator Pemberstone will be able to dump its legal costs on the leaseholders as well.

All of which is the complete opposite of the government’s repeated calls for developers and freeholders to “do the decent thing” and to pay up for the cladding defects to be put right.

This has been echoed by Sajid Javid, when Communities Secretary, his successor James Brokenshire and the new housing minister Kit Malthouse.

The general ministerial view seems to be that housebuilders and freeholders coin so much money out of the leasehold system that they might as well pay up to put right the Grenfell cladding. 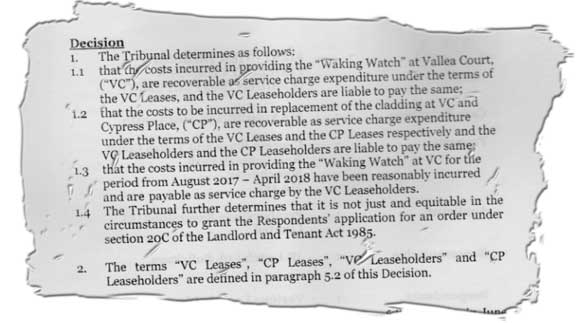 But it is not the job of the tribunal to guess what is the “decent thing”, but to apply the law which means interpreting the leases.

Inevitably, the leases were created and designed to make them as attractive as possible to “landlords” – that is, the entity that bought the site’s income streams such as ground rents, hidden insurance, energy and other commissions, management contracts etc.

So far, leaseholders have yet to persuade the tribunal that they should not pay to remove combustible Grenfell cladding from the sites where they were unlucky enough to purchase leasehold flats.

Indeed, the tribunal told leaseholders at Citiscape, in Croydon, and at the Fresh Building in Salford that they would be liable.

Curiously, another case is heading for the tribunal where Slough Council is seeking a ruling on liability at Nova House: it claims this is for the fire marshal cost only.

Susan Bright, professor of land law at Oxford University, analysed the legal options for leaseholders living in sites with Grenfell cladding at last month’s LKP-organised parliamentary meeting. It was attended by Kit Malthouse and his Labour opposite Sarah Jones.

Essentially, leaseholders would have to pool resources and stay united for a prolonged period while engaged in expensive litigation with no certainty of result.

She analyses the tribunal decision over Vallea Court and Cypress Place here:

The Green Quarter decision: leaseholders have to pay

The Manchester Green Quarter decision released on Thursday 26 July 2018, like the earlier Citiscape decision, finds the leaseholders liable to pay for the cost of replacement cladding under the terms of their leases.

Pemberstone instructed JB Leitch, the Liverpool-based debt collectors, in the case, who are also being employed by Slough Council against the leaseholders at Nova House.

The owners of flats in two Manchester apartment blocks built with flammable cladding will have to pay an estimated £3m to have their homes made fire-safe, following a ruling by a tribunal. Vallea Court and Cypress Place in the city’s Green Quarter failed fire safety checks last July and were found to have cladding similar to that on Grenfell Tower.

A property giant is dragging hundreds of city centre residents through the courts to force £10,000 each out of them for the removal of dangerous Grenfell-style cladding. One year on from the tower block tragedy, more than 300 leaseholders at Vallea Court and Cypress Place in the Green Quarter, Manchester, have been arguing their case at a tribunal.

Leaseholders in two high-rise blocks with dangerous cladding must pay more than £10,000 each for its removal, a tribunal has ruled. Freeholder Pemberstone had argued it should not fund the work at Cypress Place and Vallea Court in Manchester.

Flat owners have been left devastated after a tribunal ruled they must pay £10,000 each to replace Grenfell-style cladding on their homes – AND legal costs. A year after the horrific tragedy, property investor Pemberstone took more than 300 leaseholders at Vallea Court and Cypress Place in the Green Quarter to a tribunal over their refusal to foot the £3m bill.

How much? Green Quarter residents told to pay £3m to replace Grenfell-style cladding

As leaseholders are asked to stump up costs, is it time we turned the sprinklers on the property barons? By Danny Moran. The news that residents at two Green Quarter tower blocks are being asked to pay for their buildings’ cladding to be replaced is merely the latest spectacle to be seen at the ideal homes atrocity exhibition currently touring the nation.

Taylor Wimpey has paid out only £11.2m of the supposed £130m to sort the doubling ground rent scam
Next Post: Slough council takes Nova House leaseholders to tribunal over Grenfell cladding costs