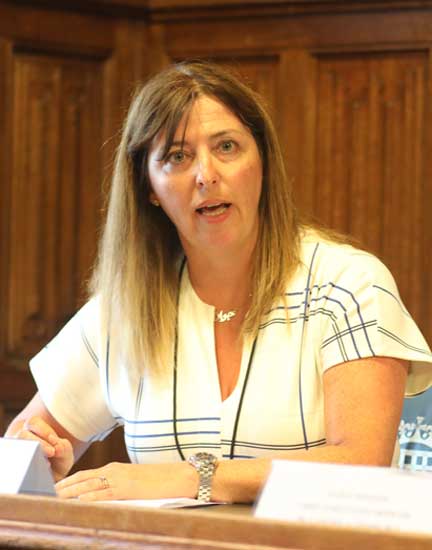 Jo was also on BBC R4 You and Yours yesterday, which can be heard here at 35 mins in:

Treatments for depression, Debt collection, Widebeam canal boats, You and Yours – BBC Radio 4

NHS treatments for depression and the bailiffs demanding payment of someone else’s debt.

My Taylor Wimpey home has one of the now infamous doubling ground rents and ludicrous permission fees to make alterations or re-mortgage. Buying my freehold (and the statutory route is known as enfranchisement) is the only way to avoid both of these costs and truly own my own home.

As a leaseholder caught up in this scandal it is depressing to hear Taylor Wimpey being publicly praised for setting aside £130m to help solve a problem they created in the first place. A solution whereby they will convert my doubling ground rent to RPI and all will be ok, well so they would like you to believe.

If Gerald Ratner knew this was how things work he might have offered a 1p refund for selling “total crap” and then have kept his job, saved his company £500 million and been told well done by the government.

Other developers with doubling ground rents are following Taylor Wimpey’s lead. For those of us with doublers it’s a simple decision – right?

Under the terms of my new lease the ground rent increases in line with RPI every 10 years for the full term of the lease – 250 years in my case whereas doubling stops after 50 years.

The total ground rent under doubling is just short of £2m.

If RPI continues to increase at the current rate of 3.3% per annum the total ground rent is £25.7m.

Now this doesn’t take into account the time value of money, and costs to enfranchise are highly dependent on the interest rate used to discount future ground rent payments – this is called the capitalisation rate.

Capitalisation rates have historically been at around 7% and according to the leasehold valuers I’m using, the enfranchisement cost under my converted lease is c.£8-11k versus c. £26-36k with my current doubler.

A low capitalisation rate makes enfranchisement more expensive for an RPI lease than a doubler, because the payments keep increasing over the full term of the lease.

I may also need to go to tribunal to get permission fees removed.

If freeholders successfully argue a low capitalisation rate and Taylor Wimpey have capped their corporate liability with settlement agreements on conversion to RPI what a great coup that will be for developers and freeholders – public recognition for solving the problem, unaffordable enfranchisement for leaseholders and a ground rent income stream that rises for the whole duration of the lease supplemented with permission fees.

In January this year the Governor of the Bank of England, Mark Carney, called for RPI to be axed, noting that “most people acknowledge it is of no merit”.

And the Office for National Statistics published an excellent article on 8th March this year on the shortcomings of RPI as a measure of inflation, quoting “Our position on the RPI is clear: we do not think it is a good measure of inflation and discourage its use.”

Why are ground rents with RPI increases acceptable?

If I convert to RPI I have to accept this offer as full and final settlement from Taylor Wimpey.

Why shouldn’t this company give me what they promised – my freehold at any point in the future for c. £5k – and why should I settle for less?

I am absolutely, totally, baffled as to how I can have made the biggest financial purchase of your life yet have less consumer rights than if I had bought a fridge.

What about the thousands of leaseholders who can’t afford to enfranchise regardless of capitalisation rates and are going to be left at the mercy of an index that the Bank of England think should be axed and those hideous, stinging, permission fees?

House prices don’t rise in line with RPI and lenders are tightening the lending requirements on houses with onerous terms including those where ground rent exceeds 0.1% of the property value.

What’s going to happen to all those people with RPI ground rents when this happens? – and yet developers have the audacity to say that they have done nothing wrong with RPI increasing ground rents.

We need a Select Committee Inquiry to hold those to account that have created this mess.

We urgently need a way forward to help the thousands and thousands of people who have been mis-sold their homes.

Developers, who created these leases and their CEO’s; Pete Redfern, Jeff Fairburn et al, who have outrageously profited from Help to Buy on new leasehold homes, must be forced to give proper redress and give customers, like me, what they promised – my freehold for £5k.